We currently caution against using TaqPath S dropout as a proxy for B.1.1.7 in the US

Multiple SARS-CoV-2 variants are circulating globally, however, phenotypic differences, if any, have yet to be described for the majority of these variants. Routine surveillance sequencing of SARS-CoV-2 is critical for identifying and tracking new mutations. Most notably, two recently emerged lineages, termed B.1.1.7 (also known as 20B/501Y.V1, and Variant of Concern (VOC) 202012/01), and B.1.351 (20C/501Y.V2), have become “variants of concern.”

B.1.1.7 lineage (20B/501Y.V1) has 17 amino acid substitutions relative to the initial SARS-CoV-2 genome sequence. In particular, investigations have focused on mutations in the Spike attachment protein, including deletions of amino acids 69 and 70 (S ∆69/70), N501Y, and P681H, as well as ORF8 Q27stop. The B.1.1.7 lineage is thought to have increased transmissibility based on recent epidemiological and phylogenetic data1.

The Spike ∆69/70 deletion prevents the oligonucleotide probe used in the commercial Applied Biosystems TaqPath COVID-19 assay (ThermoFisher) from binding its target sequence, leading to what has been termed “S gene dropout” or “S gene target failure,” that is, a lack of signal from the S gene amplicon, together with successful amplification of other two SARS-CoV-2 gene targets2. It was quickly recognized that this S gene target failure could be used as a proxy for B.1.1.7 lineage viruses, at least when B.1.1.7 had already reached some prevalence in the community3. Because the S ∆69/70 deletion occurs in other genetic backgrounds in addition to B.1.1.7, sequencing is necessary to confirm the genetic lineage of a virus with S gene target failure, particularly in regions where B.1.1.7 is not already known to circulate. However, viruses displaying S gene target failure in the U.S. should be prioritized for follow-up sequencing as the proportion of these failures attributable to B.1.1.7 viruses appears to vary geographically4.

A recent post by Brendan Larsen and Michael Worobey details a novel lineage (now named B.1.375, in a recent update of pangolin5) circulating in the United States that contains S ∆69/70, but no other B.1.1.7 mutations. Wisconsin and Connecticut have found similar S ∆69/70 non-B.1.1.7 sequences. The Grubaugh lab has primarily identified S ∆69/70 sequences by targeted sequencing of S-gene dropouts, whereas the O’Connor and Friedrich labs have focused on broad surveillance sequencing in Dane County, Wisconsin. Currently, despite their similarity, these sequences were initially assigned to a number of discrete Pangolin lineages. The Pangolin team has been made aware of this and subsequently retrained PangoLEARN to name this lineage B.1.375.

Evolutionary history and mutations associated with B.1.375

Here, building off of the Worobey lab’s previous post, we present an additional 27 SARS-CoV-2 genomes released as of the early hours of January 11th, 2021 which contain the ∆69/70 and are not B.1.1.7 lineage. This pattern was revealed in a maximum likelihood phylogenetic tree inferred using augur6 (see nextrain build here), highlighting the evolutionary history of these variants with respect to viruses from other lineages (Figure 1). We obtained this tree by subsampling the set of genomes submitted to GISAID up to January 11th, from lineages B.1.1.7, B.1.351, and B.1.346, as well as contextual genomes from the US, and global genomes from Oceania, (South) Africa, Europe and Asia. Additionally, the dataset was enriched with the latest US genomes with S ∆69/70 (see acknowledgements, Table 1). 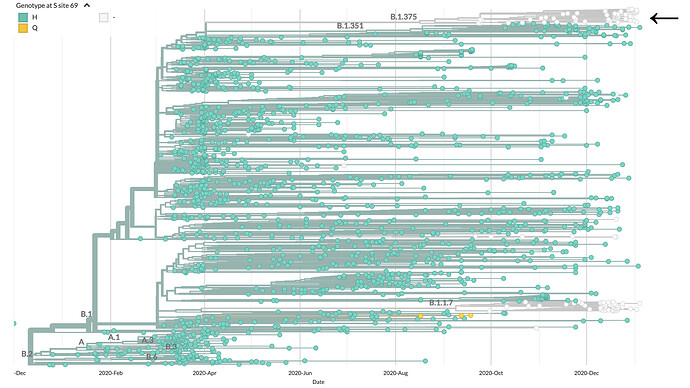 Figure11954×1100 397 KB
Figure 1. Evolutionary relationship among variants from the new lineage B.1.375 detected in the US (white circles, see arrow at the top), and other variants circulating nationally and internationally. The ‘UK variant’ (lineage B.1.1.7) is shown at the bottom, also as white circles, indicating the presence of the deletion S ∆69/70, also observed in the unrelated lineage we show in this report (interactive tree available here).


This analysis revealed a monophyletic cluster of genomes (Figure 2A) defined by 5 amino acid substitutions: ORF1a T1828A, ORF1b E1264D, ORF3a T151I, S ∆69/70, M I48V (Table 1). This lineage, which is observed in at least 12 US states in all regions of the country (Figure 2B), has been circulating locally, within the United States, since at least mid-September 2020 when it was first detected.

Table 1. List of nucleotide and amino acid substitutions that are shared among the B.1.375 lineage viruses. 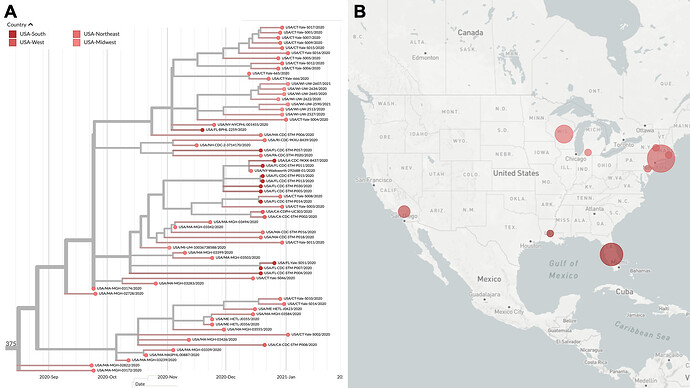 Figure21952×1098 286 KB
Figure 2. B.1.375 lineage of US variants. A) Clade highlighting new genomes sequenced by distinct groups in the US since September, and found in all regions of the country. All these genomes express the deletion S ∆69/70, but are unrelated to B.1.1.7. B) Geographic distribution of variants belonging to this US lineage (interactive tree available here).


Caution against using TaqPath S dropout as a proxy for B.1.1.7

The detection of viruses from unrelated lineages displaying S ∆69/70, such as the new one here reported (B.1.375), emphasizes that while using the TaqPath S-dropout approach as a proxy for B.1.1.7-lineage detection in the UK appears to work well, we currently caution against using this approach in the United States as there are clearly non-B.1.1.7 sequences containing the ∆69/70 that are more common than B.1.1.7. Overall, B.1.375 remains at very low levels compared to the total number of genomes sequenced from the United States. However, in Wisconsin where sequencing was non-targeted surveillance, 4% of all sequences contained S ∆69/70 from December 29, 2020 to January 4, 2020. However, the relatively high prevalence of these sequences in Wisconsin could be due to cases identified as part of a local cluster. Continued surveillance of this cluster in Wisconsin is necessary to determine if this clade is outpacing other circulating variants.

We want to emphasize that there is no data to suggest that variants from B.1.375 are more transmissible or cause more severe illness, or increased risk of death. The tracking the spread of these variants, and the potential for new variants to arise, requires enhanced genomic surveillance.

The Grubaugh lab has already begun work to develop a RT-qPCR-based screening strategy to differentiate between ∆69/70 B.1.1.7 and ∆69/70 B.1.375. They currently have a protocol that recreates the “S gene target failure” signature - essentially a TaqPath assay “hack” which can be found here. They are working on expanding this as a more specific screening tool for B.1.1.7 by detecting two S dropouts (one at ∆69/70 and one further downstream at ∆144) that are not currently found in other virus lineages (see dedicated virological post).

The Worobey group has also developed high-stringency PCR assays to detect B.1.1.7 from a variety of SARS-CoV-2 sample types. They have designed pairs of primers, one pair that amplifies a product in the vicinity of the S 69-70 deletion, another in the vicinity of the S 144 deletion, with either the forward or reverse primer in each pair binding to the B.1.1.7 spike gene in the deletion zone. Hence these primers encounter “extra” nucleotides on spike genes of viruses lacking these deletions and fail to bind effectively. Positive control oligonucleotides with and without the deletions (B.1.1.7-like and non-B.1.1.7-like, respectively) as well as patient samples indicate high sensitivity and specificity, with sharp bands appearing in gels when the deletions are present, and no bands when the deletions are absent. They are currently screening wastewater samples with this approach, but it is amenable to patient samples too, including pools of samples that may contain rare B.1.1.7 cases. Details of the protocols will be shared on virological.org shortly.

We gratefully acknowledge the laboratories and researchers who made these SARS-CoV-2 genomes available on GISAID (Table 2). We also thank Áine Toole, Emily Scher and the Rambaut group for quickly training pangoLEARN with a new model to assign the new lineage B.1.375 5.

Table 2. List of genomes from the new lineage B.1.375, which also show the deletion ∆69/70 (unrelated to B.1.1.7) used in this preliminary study. We thank the authors of all 1,699 genomes used in Figure 1, which are listed in acknowledgements.pdf (242.3 KB), which outlines the author contributions.

2 Likes
B.1.258∆, a SARS-CoV-2 variant with ∆H69/∆V70 in the Spike protein circulating in the Czech Republic and Slovakia
A novel, room temperature-stable, multiplexed RT-qPCR assay to distinguish lineage B.1.1.7 from the remaining SARS-CoV-2 lineages
andersonbrito January 14, 2021, 8:20pm #2

This project was funded in part through a COVID-19 Response grant from the Wisconsin Partnership Program at the University of Wisconsin School of Medicine and Public Health, contract funds through the Center for Disease Control contract, and a FastGrant award to T.C.F. and D.H.O.