RE: Proposal to redesignate B.1.631 as recombinant lineage XB

RE: Proposal to redesignate B.1.631 as recombinant lineage XB

Correspondence to: marina.escalerazamudio@zoo.ox.ac.uk
*For details on data generated in Mexico, see the Methods section.

Frequent recombination observed among coronaviruses circulating in the human population suggests that this could be a common evolutionary mechanism that could lead to the emergence new SARS-CoV-2 variants1. Recombinant SARS-CoV-2 genomes involving lineage B.1.1.7 have been detected in the UK2, whilst several recombinant SARS-CoV-2 variants have been detected to currently circulate at low levels3. Following the preliminary results and proposal previously raised4, we performed detailed phylogenetic analysis to detect recombinant sequences/lineages and any putative breakpoints within the virus genome bases on topology congruency and SNP distribution (see Methods). The same general phylogenetic pattern was observed for the whole genome (WG) and Orf1ab trees, whilst the S and 3’-UP also showed comparable phylogenetic patterns between them. However, phylogenetic incongruencies were observed between the WG and Orf1ab trees, compared to the S and 3’-UP trees (Figure 1a). By comparing the AICc score of the best fitting model allowing for different topologies between segments, using GARD (see Methods), one breakpoint was identified which reflects a true topological incongruence (alignment site 22490, 562.098 Δ c-AIC vs the null model; Figure 1b). This site corresponds to codon 22775-22778 [GAT] in the Spike Orf; it corresponds to amino acid residue 497D, located in the trimer interface of S close to a putative receptor binding site 5 (in reference to the Wuhan-Hu-1 genome numbering; Figure 1b). Recombinant sequences identified under 3Seq and RDP4 (628_USA_CO-CDC-MMB09514673_2021_EPI_ISL_3428959_20 and 628_USA_MN-MDH-9090_2021_EPI_ISL_3260223_2021-07-2) precede the B.1.631 recombinant cluster in the Spike and 3’-UP trees (marked with an *, most basal sequence for B.1.631: 631_Mexico_CHH_IBT_IMSS_1405_2021_EPI_ISL_3355598_2021-05-27; Figures 1a, 1c). SNPs shared between B.1.628 and B.1.631 are shown in Figure 1c. Thus, we support the proposal to redesignate B.1.631 as recombinant lineage, as we find evidence for recombination for a large cluster of sequences comprising the majority of the B.1.631 lineage. 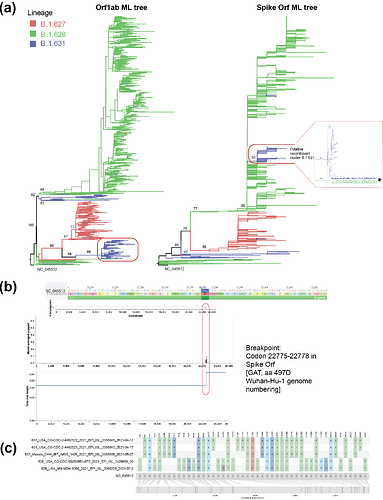 Figure 1. (a) Maximum likelihood phylogenetic trees of two SARS-CoV-2 genome partitions for the B.1.631, B.1.627 and B.1.628 lineages. (b) Recombination analysis performed on the whole genome alignment (for the aforementioned lineages) using GARD. (c) Single nucleotide polymorphisms (SNPs) shared between lineages B.1.628 and B.1.631.

Initial phylogenetic analysis
For each dataset, sequences were mapped to the complete genome of SARS-CoV-2 isolate Wuhan-Hu-1 (NC_045512) using Geneious (https://www.geneious.com/) to generate individual alignments that were visually inspected for accuracy. Sequences were removed from the datasets if (i) they were >1000nt shorter than full genome length, (ii) they were 100% similar to any other sequence, or (iii) if >10% of site were ambiguities (including N or X). Each alignment was partitioned into three sub-alignments according to different genomic regions: Orf1ab, S and and the 3’ upstream region’ (3’-UP; encompassing all coding sequences after Spike, including Orf3 up to before the 3’ UTR). The partitioned and whole genome alignments were used to estimate four initial large-scale Maximum Likelihood phylogenies (LS WG, Orf1ab, S and 3’-UP) using IQ-TREE (http://www.iqtree.org/) under a general time reversible nucleotide substitution model with gamma-distributed among-site rate variation (GTR+G); branch support was assessed using 100 bootstrap replicates. All trees were rooted using the basal NC_045512 node.

Detection of recombinant sequences/clusters
The initial large-scale Maximum Likelihood phylogenies were used to detect general phylogenetic pattern incongruencies by comparing the tree topologiess obtained for the different genomic regions. Large-scale trees were used for further subsampling the whole genome alignment in a phylogenetically-informed manner, in order to normalise the number of sequences representing each virus lineage and to reduce alignment size by removing non-informative sequences. The subsampled whole genome alignment (197 sequences, 25095 sites) was analysed using GARD (Genetic Algorithm for Recombination Detection) in HYPHY9. The subsampled alignment was also analysed using 3Seq and RDP410,11.