This work is licensed under a Creative Commons Attribution-ShareAlike 4.0 International License.

Recently a distinct phylogenetic cluster (named lineage B.1.1.7) was detected within the COG-UK surveillance dataset. This cluster has been growing rapidly over the past 4 weeks and since been observed in other UK locations, indicating further spread.

Several aspects of this cluster are noteworthy for epidemiological and biological reasons and we report preliminary findings below. In summary:
The B.1.1.7 lineage accounts for an increasing proportion of cases in parts of England. The number of B.1.1.7 cases, and the number of regions reporting B.1.1.7 infections, are growing.
B.1.1.7 has an unusually large number of genetic changes, particularly in the spike protein.
Three of these mutations have potential biological effects that have been described previously to varying extents:

The rapid growth of this lineage indicates the need for enhanced genomic and epidemiological surveillance worldwide and laboratory investigations of antigenicity and infectivity.

The two earliest sampled genomes that belong to the B.1.1.7 lineage were collected on 20-Sept-2020 in Kent and another on 21-Sept-2020 from Greater London. B.1.1.7 infections have continued to be detected in the UK through early December 2020. Genomes belonging to lineage B.1.1.7 form a monophyletic clade that is well supported by a large number of lineage-defining mutations (Figure 1). As of 15th December, there are 1623 genomes in the B.1.1.7 lineage. Of these 519 were sampled in Greater London, 555 in Kent, 545 in other regions of the UK including both Scotland and Wales, and 4 in other countries.

Figure 1 | Phylogenetic tree of the B.1.1.7 lineage and its nearest outgroup sequences, for samples collected up until 30-Nov-2020. Tips from the same location have been collapsed into circles whose area is proportional to the number of genomes represented. Three large subclades are evident within the B.1.1.7 lineage, each defined by one nucleotide change. One of these clades is defined by a further stop codon in ORF8.

The B.1.1.7 lineage carries a larger than usual number of virus genetic changes. The accrual of 14 lineage-specific amino acid replacements prior to its detection is, to date, unprecedented in the global virus genomic data for the COVID-19 pandemic. Most branches in the global phylogenetic tree of SARS-CoV-2 show no more than a few mutations and mutations accumulate at a relatively consistent rate over time. Estimates suggest that circulating SARS-CoV-2 lineages accumulate nucleotide mutations at a rate of about 1-2 mutations per month (Duchene et al. 2020).

A preliminary analysis of these observations is provided in Figure 2, which shows a regression of root-to-tip genetic distances against genome sampling date, for lineage B.1.1.7 and for a selection of related outgroup genomes. The rate of molecular evolution within lineage B.1.1.7 is similar to that of other related lineages. However, lineage B.1.1.7 is more divergent from the phylogenetic root of the pandemic, indicating a higher rate of molecular evolution on the phylogenetic branch immediately ancestral to B.1.1.7. Further, inferred nucleotide changes on this branch are predominantly amino acid-altering (14 non-synonymous mutations and 3 deletions). There are 6 synonymous mutations on the branch. This is suggestive of a process involving adaptive molecular evolution, although a role for increased fixation rates through relaxed selective constraint cannot be currently ruled out. 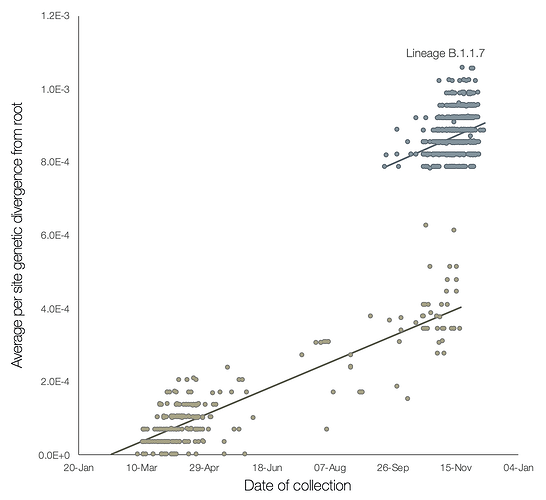 Figure 2 | Regression of root-to-tip genetic distances against sampling dates, for sequences belonging to lineage B.1.1.7 (blue) and those in its immediate outgroup in the global phylogenetic tree (brown). The regression lines are fitted to the two sets independently. The regression gradient is an estimate of the rate of sequence evolution. These rates are 5.6E-4 and 5.3E-4 nucleotide changes/site/year for the B.1.1.7 and outgroup data sets, respectively.

What evolutionary processes or selective pressures might have given rise to lineage B.1.1.7?
High rates of mutation accumulation over short time periods have been reported previously in studies of immunodeficient or immunosuppressed patients who are chronically infected with SARS-CoV-2 (Choi et al. 2020; Avanzato et al. 2020; Kemp et al. 2020). These infections exhibit detectable SARS-CoV-2 RNA for 2-4 months or longer (although there are also reports of long infections in some immunocompetent individuals). The patients are treated with convalescent plasma (sometimes more than once) and usually also with the drug remdesivir. Virus genome sequencing of these infections reveals unusually large numbers of nucleotide changes and deletion mutations and often high ratios of non-synonymous to synonymous changes. Convalescent plasma is often given when patient viral loads are high, and Kemp et al. (2020) report that intra-patient virus genetic diversity increased after plasma treatment was given.

Under such circumstances, the evolutionary dynamics of and selective pressures upon the intra-patient virus population are expected to be very different to those experienced in typical infection. First, selection from natural immune responses in immune-deficient/suppressed patients will be weak or absent. Second, the selection arising from antibody therapy may be strong due to high antibody concentrations. Third, if antibody therapy is administered after many weeks of chronic infection, the virus population may be unusually large and genetically diverse at the time that antibody-mediated selective pressure is applied, creating suitable circumstances for the rapid fixation of multiple virus genetic changes through direct selection and genetic hitchhiking.

These considerations lead us to hypothesise that the unusual genetic divergence of lineage B.1.1.7 may have resulted, at least in part, from virus evolution with a chronically-infected individual. Although such infections are rare, and onward transmission from them presumably even rarer, they are not improbable given the ongoing large number of new infections.

Although we speculate here that chronic infection played a role in the origins of the B.1.1.7 variant, this remains a hypothesis and we cannot yet infer the precise nature of this event.

Table 1 provides details of the B.1.1.7 lineage-specific non-synonymous mutations and deletions. We note that many occur in the virus spike protein. These include spike position 501, one of the key contact residues in the receptor binding domain (RBD), and experimental data suggests mutation N501Y can increase ACE2 receptor affinity (Starr et al. 2020) and P681H, one of 4 residues comprising the insertion that creates a furin cleavage site between S1 and S2 in spike. The S1/S2 furin cleavage site of SARS-CoV-2 is not found in closely related coronaviruses and has been shown to promote entry into respiratory epithelial cells and transmission in animal models (Hoffmann, Kleine-Weber, and Pöhlmann 2020; Peacock et al. 2020; Zhu et al. 2020). N501Y has been associated with increased infectivity and virulence in a mouse model (Gu et al. 2020). Both N501Y and P681H have been observed independently but not to our knowledge in combination before now.

Also present is the deletion of two amino acids at sites 69-70 in spike - this mutation is one of a number of recurrent deletions observed in the N terminal domain of Spike (McCarthy et al. 2020; Kemp et al. 2020) and has been seen in multiple lineages linked to several RBD mutations. For example, it arose in the mink-associated outbreak in Denmark on the background of the Y453F RBD mutation, and in humans in association with the N439K RBD mutation, accounting for its relatively high frequency in the global genome data (~3000 sequences).

Table 1 | Non-synonymous mutations and deletions inferred to occur on the branch leading to lineage B.1.1.7 lineage.

Outside of spike, the ORF8 Q27stop mutation truncates the ORF8 protein or renders it inactive and thus allows further downstream mutations to accrue. Early on during the pandemic multiple virus isolates with deletions leading to loss of ORF8 expression were isolated worldwide, including a large cluster in Singapore with a deletion leading to both a truncated Orf7b and ablated ORF8 expression. The Singaporean strain, which had a 382nt deletion, was associated with a milder clinical infection and less post-infection inflammation, however this cluster died out at the end of March after Singapore successfully implemented control measures (Young et al. 2020). Subsequent work has found that the ORF8 deletion has only a very modest effect on virus replication in human primary airway cells compared to viruses without the deletion, leading to a slight replication lag compared to viruses with the deletion (Gamage et al. 2020). As ORF8 is usually 121 amino acids long it is likely the stop codon at position 27 observed in lineage B.1.1.7 results in a loss of function.

We report a rapidly growing lineage in the UK associated with an unexpectedly large number of genetic changes including in the receptor-binding domain and associated with the furin cleavage site. Given (i) the experimentally-predicted and plausible phenotypic consequences of some of these mutations, (ii) their unknown effects when present in combination, and (iii) the high growth rate of B.1.1.7 in the UK, this novel lineage requires urgent laboratory characterisation and enhanced genomic surveillance worldwide.

Interesting. Note that people with B-cell deficiencies (CVID in particular, but SIgA and I think others–these deficiencies are often not diagnosed until adulthood) are well known to have chronic OPV infections (more than 5 years in several cases), which evolve over time. The viruses are considered vaccine-derived polioviruses if they’re more than 1% from the original Sabin virus, and are designated iVDPV. iVDPVs can often (usually, I think) be distinguished from circulating VDPVs (cVDPVs) by a high level of non-synonymous mutations in particular parts of the capsid. cVDPVs, by contrast, arise in populations with low vaccination coverage, where the virus (usually Sabin 2) is transmitted serially, presumably with little immune pressure. cVDPVs have a much higher percentage of synonymous mutations (as you’d expect). IVIG treatment of chronically infected people with CVID may also play a role. There have been instances, in countries where polio has been eliminated, of iVDPVs have been detected and identified in wastewater. In at least a couple of those cases, I believe they attempted (unsuccessfully) to trace the individual by following up the sewage lines and testing at the branches.

Note also that a chronically infected person also would be a setup for recombination.

Thank you for the great work.
I am concerned with the lack of monitoring of SARS-Cov-2 in animals.
COVID-19 is a zoonosis and other animals, including Syrian hamster are prone to infection .
Minks from different locations have been infected with a variant containing the S69-70deletion. It has been shown that minks can infect humans… but what was the origin of this new mink associated strain?
Now a new UK variant emerges with a mutation that increase the affinity of the spike to human and murine ACE2 …

The mink associated SARS-CoV-2 variant has been found in wild minks…
This is not enough to take more seriously the One Health approach of this pandemics !? It’s a zoonosis .
Why we still don’t have monitoring plans for animals that cohabit with sars-Cov-2 positive persons ?

Does someone knows when the in vitro seroneutralization -SNT assays with samples obtained from vaccinated persons tested against this new strain will be available ? I am sure that they are already done. It is a pretty straightforward assay… and is a crucial assay to provide us an idea about the vaccine protection against this new strain …
the major structural changes of the Spike could suggest a potencial failure of licensed vacines . Do you agree ?
Or I am being too pessimist …

Sorry for too many questions … but I appreciate your work and opinion
One more …
Faster evolutionary rate of the vírus was reported in Mink associated SARS-CoV-2 in Netherlands by Munnink et al.
Do you think that spillover to new host species could speed up the evolutionary rate of SARS-CoV-2?
In HIV-1 and EIAV vaccine studies there are reports of the emergence of new variants for immune evasion. The same is associated to antivirals .
Why with SARS-CoV-2 everyone is betting in the lack of immune evasion responses to vaccines ?
What is the scientifc evidence that we have that are indicating that we’ll have stable and low evolutionary rates in SARS-COV-2?