Here we report a preliminary genomic analysis of SARS-CoV-2 B.1.1.28 lineage circulating in the Brazilian Amazon region and their evolutionary relationship with emerging and potential emerging SARS-CoV-2 Brazilian variants harboring mutations in the RBD of Spike (S) protein. Phylogenetic analysis of 69 B.1.1.28 sequences isolated in the Amazonas state revealed the existence of two major clades that have evolved locally without unusual mutations in the S protein from April to November 2020. The B.1.1.28 viruses harboring mutations S:K417N, S:E484K and S:N501Y, recently detected in Japanese travelers returning from Amazonas, branched within one of the Amazonian B.1.1.28 clades here identified, suggesting that these sequences could be representatives of a novel (unreported) emerging Brazilian clade, here designated B.1.1.28(K417N/E484K/N501Y). Our analysis also confirms that the putative novel clade B.1.1.28(K417N/E484K/N501Y) detected in Japanese travelers did not evolve from the clade B.1.1.28(E484K) recently detected in Rio de Janeiro and other Brazilian states, but both variants arose independently during the evolution of the B.1.1.28 lineage.

The emergence of new SARS-CoV-2 variants harboring mutations in the Spike protein that might impact viral fitness and transmissibility has been an issue of great concern, particularly after the recent identification of two independent emerging strains in UK and South Africa with a larger than usual number of mutations in the Spike protein that may have functional significance. Both the emerging SARS-CoV-2 lineages B.1.1.7 in UK (HV 69-70 deletion, Y144 deletion, N501Y, A570D, P681H, T716I, S982A, D1118H) (1) and B.1.351 in South Africa (L18F, D80A, D215G, R246I, K417N, E484K, N501Y and A701V) (2) acquired eight lineage-defining amino acid replacements in the Spike protein, being mutation N501Y in the receptor-binding domain (RBD) the only common amino acid replacement detected in both lineages.
The SARS-CoV-2 epidemic in Brazil was dominated by two lineages designated as B.1.1.28 and B.1.1.33 that probably emerged in the country in February 2020 (3,4). Recent reports bring attention to the emergence of new SARS-CoV-2 B.1.1.28 variants in Brazil harboring mutations in the Spike protein common to the B.1.1.7 and B.1.351 lineages. A study published in December 2020 described the emergence of a novel B.1.1.28 clade in the state of Rio de Janeiro that was distinguished by five lineage-defining mutations, including one in the Spike protein (E484K), also detected in the B.1.351 South African lineage (5), but of independent origin. This clade, here designated as B.1.1.28(E484K), was subsequently detected in other Brazilian states and was further associated with two cases of reinfection in patients originally infected by the B.1.1.33 lineage (6). More recently, the Japanese Ministry of Health reported the presence of a new SARS-CoV-2 B.1.1.28 variant in four travelers that arrived in Japan returning from Amazonas state (northern Brazil) on 2nd January 2021 that harbors 10 synapomorphic mutations in the Spike (L18F, T20N, P26S, D138Y, R190S, K417T, E484K, N501Y, H655Y, T1027I), including one (N501Y) detected in both the B.1.351 and the B.1.1.7 lineages and three also detected in the B.1.351 South African lineage only (L18F, K417N, E484K) (7).
In order to have a more in depth understanding of the origin of the new B.1.1.28 variant detected in Japan, here designated as B.1.1.28(K417N/E484K/N501Y), we analyzed the genetic diversity of 148 SARS-CoV-2 whole-genome strains circulating in the Brazilian Amazon state between April and November, 2020. 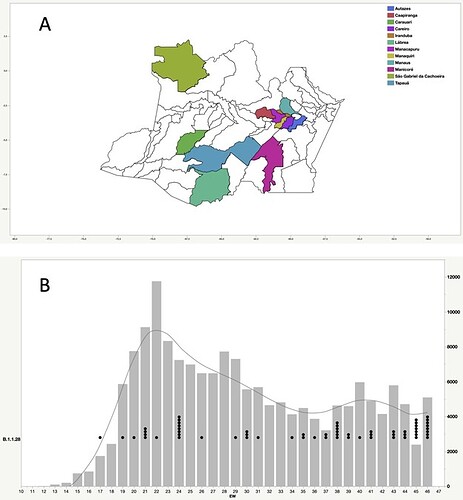 Figure 2. Maximum likelihood (ML) phylogenetic tree of the B.1.1.28 whole-genome sequences from Brazil and Japan. The sequences from Amazonas state are represented by green circles and those sampled in Japan by the purple ones. The B.1.1.28(E484K) cluster is highlighted in blue, while the two clusters identified in the Amazonas state (28-AM-I and 28-AM-II) are highlighted in green. The aLRT support values are indicated in key nodes. The tree was rooted in the oldest sample and branch lengths are drawn to scale with the left bar indicating nucleotide substitutions per site. 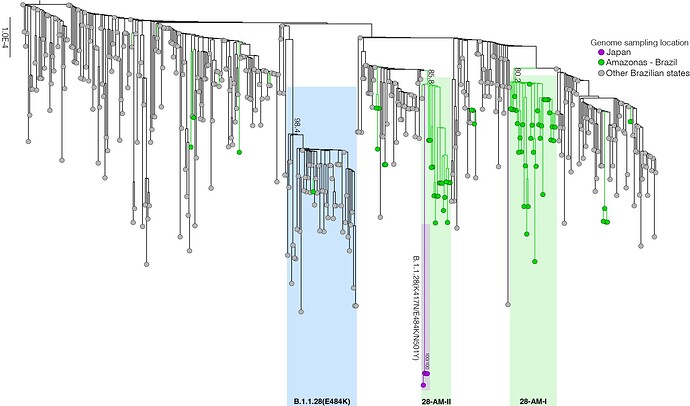 Most B.1.1.28 Brazilian clades identified so far were characterized by a low number of synapomorphic mutations that distinguish them from other Brazilian B.1.1.28 sequences. We identify one lineage-defining synonymous mutation in clade 28-AM-I (C29284T), two mutations in clade 28-AM-II and basal sequences (A6319G and T26149C [ORF3a:S253P]), one synonymous mutation exclusive of clade 28-AM-II (A6613G), and five mutations in clade B.1.1.28(E484K) (C100U [5’UTR], T10667G [NSP5:L205V], C11824T [NSP6], G23012A [S:E484K], and G28628T [N:A119S]) (Table). The pattern is consistent with the accumulation of mutations at a relatively constant rate over time during local evolution and diversification of lineage B.1.1.28 in Brazil (Figure 3). The branch leading to the B.1.1.28 sequences sampled from Japanese travelers, by contrast, accumulated an unusual high number of genetic changes (Figure 3), in addition to those in the Spike protein (Table), which resemble the pattern observed in the B.1.1.7 and B.1.351 lineages from UK and South Africa. None of the B.1.1.28 sequences from Amazonas detected in our genomic survey displayed such a divergent pattern of nucleotide and amino acid substitutions. 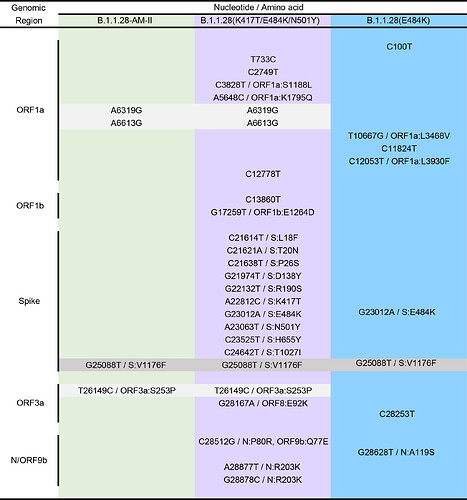 Figure 3. Correlation between the sampling date of B.1.1.28 sequences and their genetic distance from the root of the ML phylogenetic tree. Colours indicate the B.1.1.28 clade of the corresponding sequences according to the legend at left. 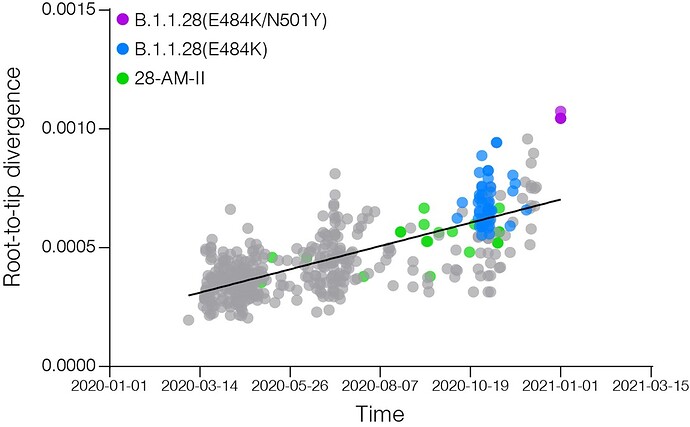 These findings support that the SARS-CoV-2 B.1.1.28 strains detected in Japanese travelers returning from the Brazilian Amazon region probably evolved from a viral lineage that circulates in the Amazonas state since April 2020, and might be representatives of a potentially new emerging Brazilian lineage, here designated as B.1.1.28(K417N/E484K/N501Y). Local B.1.1.28 Amazonian lineages seem to have evolved at a constant rate between April and November 2020 and none of the sequences here obtained displayed an unusually high number of mutations in the Spike or in any other genomic region. These findings support that the fast mutation rate detected in the B.1.1.28(K417N/E484K/N501Y) variant is a recent phenomena that probably took place between December 2020 - January 2021. Aiming to detect the circulation of this lineage among the Amazonian population, we are currently conducting a genomic survey of SARS-CoV-2 recently infected individuals in Amazonas . Our preliminary analysis also confirms that the emerging Brazilian lineages B.1.1.28(E484K) and B.1.1.28(K417N/E484K/N501Y) arose independently during the diversification of the B.1.1.28 lineage in Brazil. The concurrent emergence of different viral B.1.1 lineages carrying mutations K417N, E484K and N501Y in the RBD of the Spike protein in different countries around the world during the second half of 2020 suggests convergent selective changes in SARS-CoV-2 evolution due to similar evolutionary pressure during the process of infection of millions of people. If these mutations confer some selective advantage for the viral transmissibility we should expect an increasing frequency of those viral lineages in Brazil and around the world in the following months.

2 Likes
Genomic characterisation of an emergent SARS-CoV-2 lineage in Manaus: preliminary findings
B.1.258∆, a SARS-CoV-2 variant with ∆H69/∆V70 in the Spike protein circulating in the Czech Republic and Slovakia
paola February 3, 2021, 10:46pm #2

Update of the SARS-CoV-2 genomic surveillance in the Amazonas state, Brazil

Here follows an update of our previous post showing lineage assignment of 114 SARS-CoV-2 high coverage (zero Ns) and complete (>29.5 Kb) genome sequences collected in different municipalities of the Amazonas state between 1st November 2020 and 13th January 2021. Our data shows the first detection of lineage P.1 on 4th December 2020 in Manaus and its subsequent identification in other municipalities across the Amazonas state. These include not only several municipalities of the Manaus metropolitan region (i.e., Careiro, Iranduba, Manacapuru, Presidente Figueiredo, and Rio Preto da Eva), but also cities located up to 1,100 Km of distance from Manaus and at the border region with Peru, Colombia and Venezuela (São Gabriel da Cachoeira and Tabatinga) (Figure 1). Our data support a rapid increase in the proportion of P.1 cases in the Amazonas state from 0% in November 2020 (n=0/24), to 51% in December 2020 (n=28/55) and 91% in January 2021 (n=32/35) (Table). The P.2 variant, by contrast, was only detected in Manaus at a relatively low and constant frequency (4-11%) between November 2020 and January 2021.

Table. Temporal distribution of SARS-CoV-2 lineages in the Amazonas state.

Figure 1. Municipalities of the Amazonas state with SARS-Cov-2 P.1 lineage samples sequenced in this study. 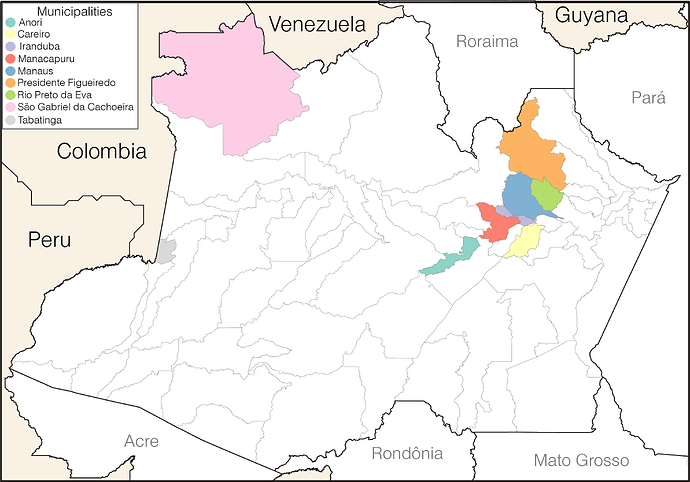 A closer inspection of the genetic diversity within the previously defined Amazonian B.1.1.28 clade 28-AM-II revealed a P.1-like sequence sampled in Manaus on 23th December 2020 that branched basal to the P.1 lineage (Figure 2A). This P.1-like sequence harbors 6/10 P.1 lineage-defining mutations in the Spike protein (L18F, P26S, D138Y, K417T, E484K, N501Y) as well as P.1 lineage-defining mutations in the NSP3 (K977Q), NS3 (S253P) and N (P80R) proteins. The P.1-like sequence did not display the nine nucleotides deletion at NSP6 (S106del, G107del, F108del) nor the four nucleotides insertion at position 28269-28273, but displayed a 12 nucleotides insertion at the Spike (ins214ARNR). Similar to the P.1 lineage, the P.1-like sequence also accumulated an unusual high number of genetic changes (Figure 2B). Our sampling effort from November and December in Manaus further revealed a small clade (n = 3) of B.1.1.33 lineage sequences harboring the mutation E484K in the Spike protein.

Figure 2. Detection of highly divergent P.1 and P.1-like variants in Manaus. A) Maximum likelihood (ML) phylogenetic tree of the B.1.1.28 whole-genome sequences from the Amazonas state classified within clade 28-AM-II and lineage P.1. The lineage P.1 is collapsed for visual clarity. Branches and tips are coloured according to the clade/lineage as indicated in the legend at the bottom right. The aLRT support values are indicated in key nodes. Non-synonymous lineage-defining mutations in the Spike protein common to both P.1 and P.1-like variants and those specific to each variant are indicated in the corresponding branches. Branch lengths are drawn to scale with the bar indicating nucleotide substitutions per site. B) Correlation between the sampling date of Brazilian B.1.1.28 sequences and their genetic distance from the root of the ML phylogenetic tree. Points corresponding to the clade 28-AM-II, sequence P.1-like and lineage P.1 are colored as indicated in the legend.

These findings clearly support that most SARS-CoV-2 cases detected in Manaus since December 2020 are being caused by the P.1 lineage, in agreement with those described by Faria et al. (Genomic characterisation of an emergent SARS-CoV-2 lineage in Manaus: preliminary findings - #2 by nuno_faria). Our results also point that the P.1 lineage emerged in a short time frame and disseminated fast outside Manaus reaching nearby municipalities of the Metropolitan region as well as very distant municipalities located at the border region with neighboring South American countries. Furthermore, the detection of a P.1-like basal genome, harboring some of the P.1 lineage-defining mutations, and a group of B.1.1.33-E484K viruses in Manaus suggests that the diversity of SARS-CoV-2 variants carrying mutations of concern at the Spike protein circulating in this Brazilian city in late 2020 could be larger than initially described.

Update: COVID-19 epidemic in the Brazilian state of Amazonas was driven by long-term persistence of endemic SARS-CoV-2 lineages and the recent emergence of the new Variant of Concern P.1 | Research Square