Introduction
Proponents of theories for the unnatural origin of severe acute respiratory syndrome coronavirirus-2 (SARS-CoV-2) have asserted that the 12 nucleotide insert in the spike gene, which results in acquisition of a furin cleavage site in spike, may have arisen by laboratory manipulation (Relman, 2020; Segreto and Deigin, 2020; Seyran et al., 2020; Sirotkin and Sirotkin, 2020). Here, we compile evidence demonstrating that insertion/deletion (indel) events at the S1/S2 and S2’ protease cleavage sites of the spike precursors are commonly occurring natural features of coronavirus evolution. We also identify heretofore undescribed similarities in the S1/S2 and S2’ cleavage sites of multiple diverse coronavirus spikes that provide further evidence against a laboratory origin of SARS-CoV-2. 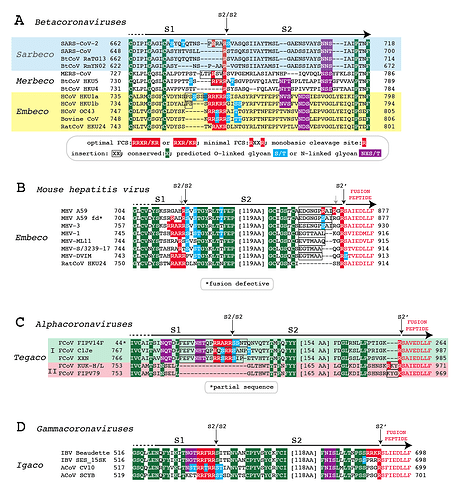 Results
While recent analyses suggest the existence of as yet unsampled sarbecovirus lineages, it is likely that SARS-CoV-2, and recently described coronaviruses isolated from pangolins, share common ancestors with the bat sarbecovirus RaTG13 (Boni et al., 2020). As previously discussed (Andersen et al., 2020; Coutard et al., 2020; Gallaher, 2020a), alignment of the spike protein of SARS-CoV-2 with spike proteins of RaTG13 and other sarbecoviruses demonstrates that the 12 base insertion in the SARS-CoV-2 spike gene adds 4 amino acids (PRRA) at the S1/S2 junction and converts a monobasic cleavage site ® to a minimal furin (polybasic) cleavage site (RRAR) (Fig. 1A). As previously described (Zhou et al., 2020), alignment of the spike of newly detected RmYN02 with other sarbecovirus spikes demonstrates that the S1/S2 junction of sarbecoviruses is variable. The neural network algorithm Net-O-Glyc predicts that the S1/S2 junction of SARS-CoV-2 spike contains 3 O-linked glycans.

The Merbecovirus subgenus of the Betacoronaviridae includes bat coronaviruses Hong Kong University-4 (HKU4) and HKU5 as well as Middle Eastern Respiratory Syndrome corononavirus (MERS-CoV), which infects camels and humans. Phylogenic analyses place HKU4 at a basal position leading separately to the HKU5 and MERS-CoV lineages (Lau et al., 2013). Relative to the HKU4 spike, the HKU5 spike has an insertion of 3 amino acids (RFR) at the S1/S2 junction (Fig. 1B). This insertion generates an optimal furin cleavage site (RFRR). The S1/S2 junction of the HKU5 spike is predicted to contain two O-linked glycans. Relative to HKU4, the MERS-CoV spike displays an insertion of 6 amino acids (LTPRSV). The insertion in the MERS-CoV spike produces a minimal furin cleavage site (RSVR), albeit without predicted O-linked glycans.

The Embecovirus subgenus of the Betacoronaviridae includes the seasonal coronaviruses OC43 and HKU1. Of additional importance is Betacoronavirus 1, an embecovirus notable for its spread to a large number of diverse animal species (Corman et al., 2018). Betacoronavirus 1 is represented here by a bovine coronavirus. The rat embecovirus HKU24 is ancestral to each of these viruses (Lau et al., 2015). HKU24, OC43 and Betacoronavirus 1 spikes have optimal furin cleavage sites (Fig. 1A). The junctional sequences in Betacoronavirus 1 and OC43 spikes are predicted to contain 4 and 2 O-linked glycans, respectively. Relative to HKU24 spike some variants of HKU1 spike have an insert of 6 amino acids (PSSSS) near the S1/S2 junction. Other variants have inserts of 2 amino acids (PS). It is unclear whether the HKU1 spike inserts have occurred independently or sequentially. HKU1 S1/S2 junctions are predicted to contain 2 or 3 O-linked glycans.

Mouse hepatitis virus (MHV), a well-studied embecovirus, further illustrates the natural variability in the S1/S2 junction of betacornavirus spikes, with examples of monobasic, minimal furin and optimal furin cleavage sites existing in spikes of various isolates (Fig. 1B). As with certain other betacoronaviruses, various serine and threonine residues at the MHV spike S1/S2 junctions are predicted O-linked glycosylation sites. The MHV spike, like other coronavirus spikes, undergoes additional proteolytic cleavages, including cleavage at a site referred to as S2’ (Belouzard et al., 2009; Millet and Whittaker, 2014). Cleavage at S2’ exposes a fusion peptide that interacts with a host cell membrane permitting fusion with the viral envelope. Compared to the spike of ancestral embecovirus HKU24 the S2’ site of MHV spike contains insertions of variable lengths, although deletions may also contribute to variability at the S2’ sites in spikes of different MHV variants. Variable indels are also observed in the S2’ site of certain other embecoviruses, including OC43.

Discussion
Furin cleavage sites have been generated naturally in the spike proteins of members of at least 3 of 4 orthocoronavirus genera, including three betacoronavirus subgenuses, via insertions and/or deletions. Both the S1/S2 and S2’ junctions of coronavirus spike genes are hotspots for RNA recombination. Furthermore, deletions, but not insertions, in the S1/S2 junction appear to arise commonly on serial passage of SARS-CoV-2 in cell culture, and have also been detected as quasi-species in infected humans (Lau et al., 2020; Liu et al., 2020). These observations stand in direct contrast to proponents of theories that SARS-CoV-2 has a nonnatural origin. A recent analysis by one of us (WRG) suggests that this variability is facilitated by short oligonucleotide “breakpoint sequences” that direct recombination to certain positions in the genome (Gallaher, 2020b).

Further evidence for the natural origin of the furin cleavage site in the SARS-CoV-2 spike is the observation that the indels in other coronavirus spikes often encode sequences with a propensity for O-linked glycosylation. As noted previously, computational prediction of O-linked glycosylation sites does not ensure that these sites are utilized by SARS-CoV-2 (Andersen et al., 2020). The sites may be used only in some cell types or species, or only under specific conditions. They may not be utilized at all. This caveat also applies to the current analyses. However, the frequency that the O-glycosylation sites are predicted across spike proteins from various coronavirus genera suggests that their presence in not due to chance. Regulation of polyprotein cleavage by O-linked glycosylation has been documented in model systems (Anderson and Wharton, 2017). Mucin-like domains which contain O-linked glycans are characterized by an abundance of serines, theonines and prolines. These amino acids form turns in protein structures. Turns potentially contribute to accessibility of furin cleavage sites, and therefore may be under positive selection.

The pattern of proline and serine/threonine residues in or near insertions of the polybasic residues, as noted in SARS-CoV-2, MERS-CoV, HKU1 and Type I feline coronavirus spikes, has not to our knowledge been previously discussed. With notable exceptions, including a predicted mucin-like patch in the carboxy terminal domain of embecovirus spikes, predicted O-glycans are rare in coronavirus spikes other than near cleavage sites. While computational algorithms such as Net-O-Glyc are capable of determining sites that are likely to be O-glycosylated, this pattern would not have been obvious to anyone constructing SARS-CoV-2 in a laboratory, either for gain-of-function research or nefarious purposes.

Previously one of us (WRG) presented additional strong evidence that the furin cleavage site insertion in SARS-CoV2 was generated via a natural process (Gallaher, 2020c). Although the 12 base insertion preserves the reading frame, the insertion is out-of-frame. It is highly implausible that any scientist attempting to insert a furin cleavage site would do so by making an out-of-frame insertion. Previous studies that introduced furin cleavage sites in SARS-CoV and MERS-CoV spike genes did not introduce insertions (Follis et al., 2006; Yang et al., 2015). Nor is it likely that any laboratorian would have engineered a change in the SARS-CoV-2 spike that purposefully resulted in prediction of O-linked glycan sites.

Acknowledgments
We are grateful to Kristian G. Andersen, Edward C. Holmes and Andrew Rambaut for essential input and discussion. Work on emerging viruses in the Garry Laboratory is supported by the National Institutes of Health, the Coalition for Epidemic Preparedness Innovations, the Burroughs Wellcome Fund, the Wellcome Trust, the Center for Disease Prevention and Control, and the European & Developing Countries Clinical Trials Partnership.

Segreto, R., and Deigin, Y. (2020). The genetic structure of SARS-CoV-2 does not rule out a laboratory origin: SARS-COV-2 chimeric structure and furin cleavage site might be the result of genetic manipulation. BioEssays : news and reviews in molecular, cellular and developmental biology, e2000240.

Sirotkin, K., and Sirotkin, D. (2020). Might SARS-CoV-2 Have Arisen via Serial Passage through an Animal Host or Cell Culture?: A potential explanation for much of the novel coronavirus’ distinctive genome. BioEssays : news and reviews in molecular, cellular and developmental biology 42, e2000091.

International Committee for the Taxonomy of Viruses (2020). The ICTV Report on Virus Classification and Taxon Nomenclature. https://talk.ictvonline.org/ictv-reports/ictv_online_report.

This is great stuff Bob. Also, now we know how critically important the cleavage site is to SARS-CoV-2 pathogenesis, transmission, and it’s ability to infect a wide range of cells and tissues compared to, say, SARS-CoV, a virus with this particular site was plausibly much more likely to be able to cause a pandemic than one without it. This is especially true, since we know that these cleavage sites likely play a role in expanding the host range of coronaviruses - e.g., https://pubmed.ncbi.nlm.nih.gov/31801868/. I.e., a virus with this site is more likely to jump species.

Nice commentary from both of you. I fully agree with all of the above. It’s notable perhaps that all three betacoronaviruses that have swept/are sweeping through the human population (OC43, HKU1, SARS-CoV-2) have a polybasic cleavage site and are of zoonotic origin. Compelling (if limited by a small sample size) that capacity for furin cleavage may be important for successful host-switches. BetaCoV1 in particular is notoriously promiscuous among hosts. To be fair, the two human alphacoronaviruses don’t have such sites, so perhaps not strictly necessary in all contexts. As far as I can tell spike cleavage of SADSr-CoVs hasn’t been experimentally verified - S1/S2 for these has a perfectly conserved “VRRM” sequence.

We are perhaps lucky a MERSr-CoV that binds a receptor abundant in the upper airway hasn’t emerged.

Thanks to Gary R. Whittaker at Cornell, who has done some of the very best work on coronavirus spike processing over the years, for pointing out that there is an error in the FIPV79 S2’ sequence - which should be as below:

This error doesn’t affect the conclusions. Rather, it demonstrates an extra indel and additional variability near the S2’ junction.

We’ll correct this in a future publication.