Linking Genotype to Phenotype: Further Exploration of Mutations in SARS-CoV-2 Associated with Mild or Severe Outcomes

Summary: We previously interrogated the relationship between SARS-CoV-2 genetic mutations and associated patient outcomes using publicly available data downloaded from GISAID in October 2020 [1]. Using high-level patient data included in some GISAID submissions, we were able to aggregate patient status values and differentiate between severe and mild COVID-19 outcomes. In our previous publication, we utilized a logistic regression model with an L1 penalty (Lasso regularization) and found several statistically significant associations between genetic mutations and COVID-19 severity. In this work, we explore the applicability of our October 2020 findings to a more current phase of the COVID-19 pandemic.

Here we first test our previous models on newer GISAID data downloaded in October 2021 to evaluate the classification ability of each model on expanded datasets. The October 2021 dataset (n=53,787 samples) is approximately 15 times larger than our October 2020 dataset (n=3,637 samples). We show limitations in using a supervised learning approach and a need for expansion of the feature sets based on progression of the COVID-19 pandemic, such as vaccination status. We then re-train on the newer GISAID data and compare the performance of our two logistic regression models. Based on accuracy and Area Under the Curve (AUC) metrics, we find that the AUC of the re-trained October 2021 model is modestly decreased as compared to the October 2020 model. These results are consistent with the increased emergence of multiple mutations, each with a potentially smaller impact on COVID-19 patient outcomes. Bioinformatics scripts used in this study are available at GitHub - JPEO-CBRND/opendata-variant-analysis. As described in Voss et al. 2021, machine learning scripts are available at GitHub - Digital-Biobank/covid_variant_severity.

We have previously used the high-level patient metadata submitted by GISAID users to differentiate between severe and mild patient outcomes. Briefly, we aggregated patient outcomes into “Mild” outcomes (e.g., Outpatient, Asymptomatic, Mild, Home/Isolated/Quarantined, Not Hospitalized) or “Severe” outcomes (e.g., Hospitalized (including severe, moderate, and stable) and Deceased (Death)). We excluded entries whereby the severity of the condition could not readily be discerned, (e.g., retesting, screened for travel, not vaccinated, moderate covid, and live). Following this approach, in Voss et al., 2021, of 3,637 SARS-CoV-2 samples from GISAID with patient outcome metadata, 2,870 were classified as severe patient outcomes and 767 as mild.

Methods: Metadata preprocessing, cohort building, mutation and metadata modeling, data visualization, and statistical analyses were all done according to procedures in Voss et al., 2021 and are diagramed in Figure 1. Briefly, an export of raw GISAID SARS-CoV-2 data was curated using Nexstrain’s ncov-ingest shell scripts [2] and FASTA sequences were parsed from the data export using Python (version 3.8.10). Of the 4,646,285 samples available in GISAID through ncov-ingest on October 26th 2021, we used a subset of 53,787 samples with patient outcome metadata for our analyses. We utilized a total of 29,359 severe and 24,428 mild samples for our analyses. FASTA sequences were aligned to the reference sequence, Wuhan-Hu-1 (NCBI: NC_045512.2; GISAID: EPI_ISL_402125) using Minimap2. Resulting VCF (Variant Call Format) files were merged using bcftools and annotated using SnpEff and filtered using SnpSift. We applied a similar bioinformatics analysis pipeline to Rayko et al [7] and is available under the scripts directory at GitHub - JPEO-CBRND/opendata-variant-analysis.

The machine learning classification workflow, available at GitHub - Digital-Biobank/covid_variant_severity, first runs 00_long.py to join and converts annotated VCF files to a single parquet file. Next, 00_red.py is run against GISAID metadata and aggregates patient outcomes into positive (‘Mild’), or negative (‘Severe’) outcomes and stores the classification into a recode dictionary. 01_wide.py, 02_var-freq.py, 02_join.py, and 03_clean.py are consecutively run for pivoting to wide format, deriving mutation frequencies per sample, joining the VCF parquet file with GISAID patient data, and further parsing. 04_logit.py runs training and testing for the logistic regression models. Finally, 05_plot-variants.py is run to derive a table of highest and lowest odds of mutations being classified into mild or severe outcomes.

Scikit-learn [4] was used to fit logistic regression models with the L1 penalty (Lasso regularization) and the default regularization strength (C = 1) to the patient (rows) and mutation (columns). A train/test split was created on the data (67% train, 33% test). The training data were split into five cross-validation folds using the Scikit-learn stratified K-fold cross-validation generator. Test data was only used for evaluating the performance of trained models. Models were persisted as pickle files using joblib. Scatter and bar plots were created using Pandas [3], Matplotlib [5] and Seaborn [6]. ROC curves were plotted using Scikit-learn [4], and Matplotlib [5]. The versions of all tools used for bioinformatics and machine learning analysis are shown in Table 1.

Similar to previous work (Voss et al., 2021), we trained a total of five logistic regression models using different input features. For each model, Scikit-learn [4] was used to calculate the area under the curve (AUC), a measure of goodness of fit of a binary classification model. AUC confidence intervals, P-values, and diagnostic odds ratios (OR) were calculated using NumPy [9] for each of the five logistic regression models. The Scikit-learn implementation of logistic regression does not provide ORs or P-values for individual variables. ORs and Chi-square test P-values for the association of mutations with Severe and Mild outcomes (Figure 5) were calculated from mutation count data using Statsmodels and SciPy respectively [8]. Mutation frequency was calculated using Pandas [3].

I. Validation of Previous Methods

Before testing and retraining the logistic regression models on newer data downloaded in October 2021, we first reproduced the previous results using the same dataset (Voss et al., 2021). Reassessing the previous results, the model using age, gender, region, and variants as features had the highest AUC (0.91) and accuracy (91%), followed by models that use fewer features (age/gender/region/clade, age/gender/region, age/gender, and age). The SARS-CoV-2 mutations significantly associated with disease severity identified previously, were also replicated in this reanalysis (Voss et al., 2021).

II. Evaluation of Model Performance on the Expanded GISAID Dataset 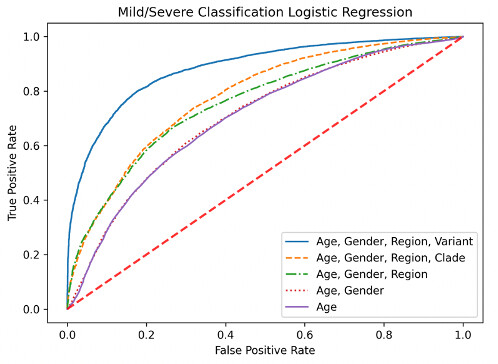 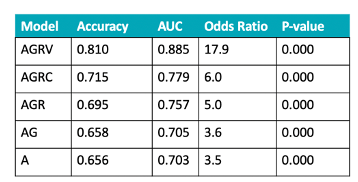 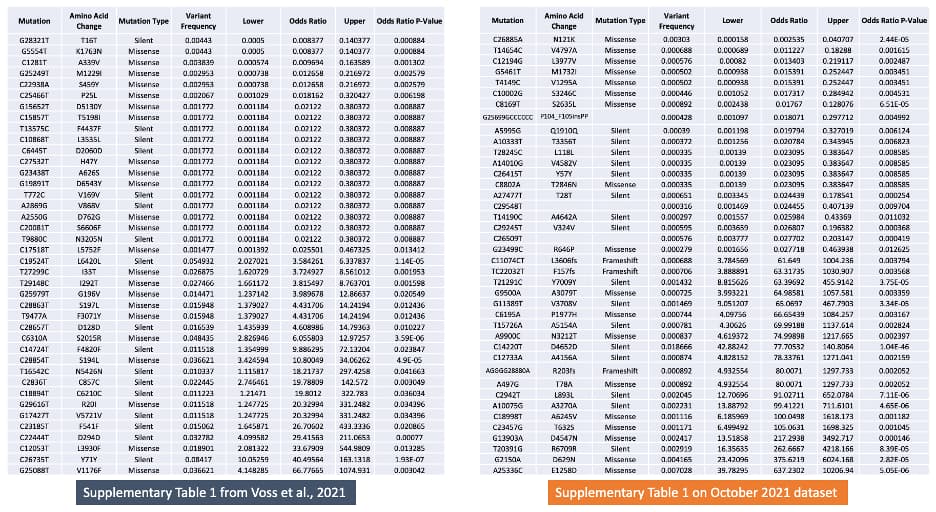 Figure 5. The 40 SARS-CoV-2 mutations with the highest (n=20) and lowest (n=20) odds of being associated with severe or mild outcomes from the previous study (Voss et al., 2021) on the left, and this updated analysis using a GISAID dataset from October 2021 (right). Mutations are ordered by odds ratio, and amino acid change, variant frequency, confidence intervals, and P-values are provided.

We explored additional machine learning binary classifiers, including Random Forest, Naïve Bayes, and Neural Network algorithms, and compared their performance to the logistic regression model. Similar to our previous study (Voss et al., 2021), 3,386 samples were used for this analysis, with 2,694 associated with severe outcomes and 692 with mild patient outcomes. Age, gender, region, and variants (AGRV) were used as features for each model. A stratified 67% train and 33% test data split was created using Sci-kit learn model selection module [4], and a 5-fold cross-validation was performed to select the best parameters for each model. Random Forest, Naïve Bayes, and Neural Network algorithms were run using Sci-kit learn ensemble, naïve_bayes, and neural_network modules respectively. As shown in Figure 6, the random forest model outperformed the other models, including the logistic regression model, with an AUC of 0.936, accuracy of 0.918 and odds ratio of 116.7. 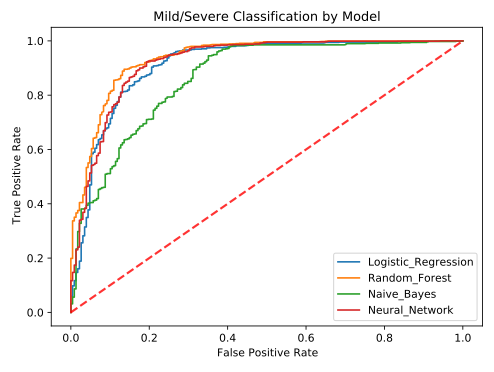 The performance of the previously (Voss et al. 2021) trained AGR (age/gender/region), AGRC (age/gender/region/clade), and AGRV (age/gender/region/variant) models was severely degraded when tested on the expanded October 2021 dataset. This diminished performance could be the result of new individual mutations and SARS-CoV-2 variants that weren’t observed in the October 2020 dataset, and vaccination and treatment advances from October 2020 to October 2021. Notably, the AGR, AGRC, and AGRV models all included region in their feature set, and the differential availability of vaccination and treatment advances would be expected to impact region features. We further investigated the potential deleterious impact of the region feature on the previous (Voss et al. 2021) models when applied to the expanded October 2021 dataset by testing an AGV (age/gender/variant) model and comparing its performance to the AG and AGRV models. We find that the AGV model has an AUC and accuracy that is similar to the AG model, rather than the AGRV model (AUC: AG=0.705, AGV=0.709, AGRV=0.580; Accuracy: AG=0.552, AGV=0.550, AGRV=0.505).

Figure 5 lists the top twenty mutations with highest and lowest odds ratios for association with severe and mild outcomes from the October 2020 and expanded October 2021 datasets. The top three mutations most associated with severe outcomes in the October 2021 dataset are T20391G (ORF1ab: R6709R), G2150A (ORF1ab: D629N), and A25336C (S: E1258D). E1258D, a missense mutation located at the cytoplasmic tail of the spike protein [10] that is observed with a frequency of 0.7%, has the highest odds (OR=637.23) for association with severe outcomes. Interestingly, an independent study using machine learning approaches to model COVID-19 disease outcomes also identified E1258D as a key predictor of disease severity [11]. This linage independent mutation is recurrent and arises independently in samples taken from donors and cell lines, indicating potential selection in host environments [12]. The three mutations most associated with mild outcomes include C26885A (M: N121K; OR=0.0030), T14654C (ORF1ab: V4797A), and C12194G (ORF1ab: L3977V). N121K, a missense mutation in the membrane protein observed with frequency of 0.3%, is most associated (OR = 0.0025) with mild outcomes. The presence of this mutation was identified as a key predictor of asymptomatic outcomes in previous machine learning modeling of COVID-19 disease outcomes [13].

In a comparison of machine learning algorithms, we found Random Forest to be the best performing algorithm for classification. The superior performance of the random forest model over the logistic regression and naïve bayes models may indicate the presence of nonlinear interactions between features (e.g., SARS-CoV-2 mutations). Indeed, Random Forest is a well utilized machine learning method for genomic data analysis because this algorithm applies well to problems with many more features than observations and accounts for interactions between features [14][15]. In addition to exploring machine learning algorithm options, the space of outcome variables can also be explored. For example, a promising direction for future modeling is the investigation of mutations associated with transmissibility.

Funding: The program is partially funded by the DOD’s Joint Program Executive Office for Chemical, Biological, Radiological and Nuclear Defense (JPEO-CBRND), in collaboration with the Defense Health Agency (DHA).

Disclaimer: The views and opinions in this article are those of the author and do not necessarily reflect that of the JPEO-CBRND, the U.S. Army, the Department of Defense, or the U.S. Government. Clearance DSS 22055.