Summary
We have detected a new variant circulating in December in Manaus, Amazonas state, north Brazil, where very high attack rates have been estimated previously. The new lineage, named P.1 (descendent of B.1.1.28), contains a unique constellation of lineage defining mutations, including several mutations of known biological importance such as E484K, K417T, and N501Y. Importantly, the P.1 lineage was identified in 42% (13 out of 31) RT-PCR positive samples collected between 15 to 23 December, but it was absent in 26 publicly available genome surveillance samples collected in Manaus between March to November 2020. These findings indicate local transmission and possibly recent increase in the frequency of a new lineage from the Amazon region. The higher diversity and the earlier sampling dates of P.1. in Manaus corroborates the travel info of recently detected cases in Japan, suggesting the direction of travel was Manaus to Japan. The recent emergence of variants with multiple shared mutations in spike raises concern about convergent evolution to a new phenotype, potentially associated with an increase in transmissibility or propensity for re-infection of individuals.

Context
Manaus, the largest city in the Amazon region, has been severely hit by the COVID-19 pandemic, with an estimated SARS-CoV-2 attack rate of three-quarters by October 2020 (Buss et al. 2020). Despite this, there is currently limited available genomic data from the region. Until 11 January 2021, existing genomes from Manaus were collected in March-April (1 reported in Valdinete et al. 2020, 6 from Candido et al. 2020; of these, 2 genomes belonged to the A2 lineage, 3 from B.1 and 2 from B.1.1.33). Since mid-December 2020 there has been a rapid increase in the number of cases and hospitalisations in Manaus (FVS/AM 2021; accessed 11 January 2021). Therefore, SARS-CoV-2 genome sequencing from more recent cases could help to shed light on the nature and diversity of lineages currently circulating in Manaus.

However, we also detected a previously undiscovered novel cluster of B.1.1.28 genomes from Manaus containing a unique genetic signature (Fig. 1B). This new cluster, hereby named P.1 lineage, comprises 42% (13 out of 31) of the genomes from Manaus in mid/late-December and contains several mutations of potential biological significance. Here we provide a preliminary phylogenetic description and explain the nomenclature designation for this recently-detected lineage.

Lineage-defining mutations of the novel SARS-CoV-2 P.1 lineage
The new P.1 lineage carries 17 unique amino acid changes, 3 deletions, and 4 synonymous mutations, and one 4nt insertion compared to the most closely related available non-P.1 sequence (EPI_ISL_722052), which lies at the base of the long branch immediately ancestral to P.1 (Fig. 1B). The P.1 lineage meets the criteria for new lineage designation on the basis that it is phylogenetically and genetically distinct from ancestral viruses, associated with rapid spread in a new area, and carries a constellation of mutations that may have functional and/or phenotypic relevance (Rambaut et al. 2020). Although it is a descendent of B.1.1.28, it cannot be given the designation B.1.1.28.1, because lineage names cannot exceed three sublevels in the current classification system. Therefore, according to the dynamic nomenclature guidelines it is given the next available top-level designation, which is P.1 (Rambaut et al. 2020; http://pangolin.cog-uk.io/). 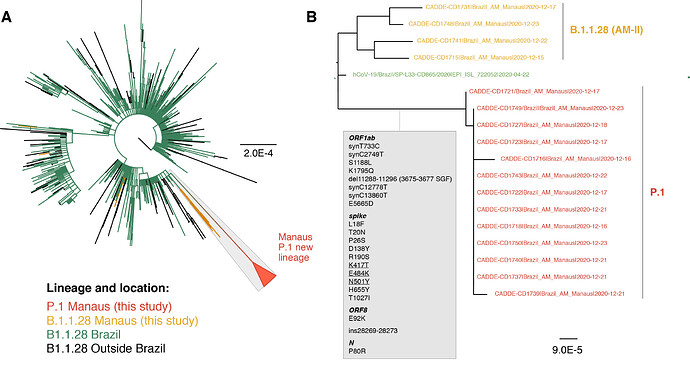 Figure 1 | Phylogenetic tree of the B.1.1.28 lineage rooted by its earliest genome (2020-03-05). A. Sequences generated in this study are highlighted in orange (n=18) and red (n=13, P.1. lineage). B. Phylogenetic tree highlighting the P.1 lineage containing the Manaus sequences and closely related sequences, including those from subclade AM-II. Inset in grey: the unique set of mutations from the P.1 lineage in comparison with its nearest sequence (EPI_ISL_722052). The scale of the phylogenetic branches is given as substitutions per nucleotide site.

Frequency of spike mutations E484K and N501Y in Brazil
We measured the frequency of two spike mutations of special interest among B.1.1.28 and its P.1. descendent lineage. The E484K mutation occurs in the receptor-binding domain (RBD) that the virus uses to bind to the human ACE2 receptor and has been associated with escape from neutralizing antibodies (Greaney et al. 2020). This variant now circulates throughout Brazil (Voloch et al. 2020; Naveca et al. 2020) and has been detected in a case of reinfection in Salvador, Bahia state (Nonaka et al. 2020). The frequency of the E484K among within B.1.1.28 lineage was 13% (n=100/750 genomes), while the frequency of E484K in the P.1 lineage was 100% (n=6/6 genomes with information at the position of interest). The N501Y mutation also occurs in the virus’ RBD. This mutation is associated with increased binding specificity and faster-growing lineages. This mutation is present in the P.1 lineage but has not been detected in Brazil, except in the two cases from a distinct B.1.1.7 lineage (Claro et al. 2020) and a single B.1 sequence from northeast Brazil (Paiva et al. 2020). The frequency of N501Y in the P.1 lineage was 100% (n=7/7 genomes with information at position of interest).

The set of mutations/deletions shared between P.1, B.1.1.7, and the B.1.351 lineages appear to have arisen entirely independently. Further, both mutations shared between P1 and B.1.351 seem to be associated with a rapid increase in cases in locations where previous attack rates are thought to be very high. Therefore it is essential to rapidly investigate whether there is an increased rate of re-infection in previously exposed individuals.

Limitations and future steps
These results should be considered with caution as the sample size is limited. Additional genome sequencing from the region is critically needed to investigate the frequency of the new variant over time, estimate its date of emergence, and infer population growth rates. Additional sequencing will also help to monitor local transmission of another epidemiologically relevant lineage, lineage B.1.1.7, which was discovered in the UK in early December 2020 (Rambaut et al. 2020) and has also been detected in two cases in Brazil 10 days later (Claro et al. 2020).

Data sharing
Genome data generated from Manaus has been deposited in GISAID with IDs EPI_ISL_804814 to EPI_ISL_804844. B.1.1.28 and P1 sequences can also be downloaded from CADDE center dedicated GitHub page. Genome sequences were obtained on 10 January 2021. Findings were shared with representatives from the World Health Organization, Pan American Health Organization, and Ministry of Health Colombia, Secretary of Health Amazonas, and FioCruz Manaus on 11 January 2021, during the elaboration of this report.

Acknowledgments
A full list acknowledging those involved in the diagnostics and generation of new sequences as part of the CADDE-Genomic-Network can be found in Table S1. We thank the administrators of the GISAID database for supporting rapid and transparent sharing of genomic data during the COVID-19 pandemic and to all our colleagues sharing data on GISAID. We also thank Dr. Felipe Naveca for sharing information ahead of publication. We thank Koen Deforche for identifying a shared mutation of interest within minutes of the original release of our report. A full list acknowledging the authors submitting B1.1.28 genome sequence data used in this study can be found in Table S2. Both supplementary tables can be found in https://github.com/CADDE-CENTRE/Novel-SARS-CoV-2-P1-Lineage-in-Brazil.

2 Likes
SARS-CoV-2 reinfection by the new Variant of Concern (VOC) P.1 in Amazonas, Brazil
Spike protein mutations in novel SARS-CoV-2 ‘variants of concern’ commonly occur in or near indels
Emergence and spread of SARS-CoV-2 lineage B.1.1.7 in Brazil
B.1.258∆, a SARS-CoV-2 variant with ∆H69/∆V70 in the Spike protein circulating in the Czech Republic and Slovakia
nuno_faria January 25, 2021, 2:55am #2

Increasing frequency of the P.1 lineage in Manaus

Following up on our previous post, here we share a frequency table by date of collection for a total of 142 SARS-CoV-2 genome sequences from Manaus, including 115 partial, near-complete, and complete SARS-CoV-2 genome sequences generated by our team from samples collected in December 2020 (n=67, collection dates between 15 December 2020 and 31 December 2020) and January 2021 (n=48, collection dates between 1 Jan 2021 and 9 Jan 2021). Near-complete and complete sequences were classified using pangolin; partial sequences were typed using maximum likelihood phylogenetic analysis with an in-house dataset of near-complete or complete P.1, P.2, and B.1.1.28 sequences.

This analysis includes considerably more data compared to our previous post on the recent emergence of a new P.1 lineage in Manaus and suggests that most recent cases in Manaus are being caused by local transmission of the P.1 lineage, although P.2 and other lineages might still be circulating. These results should be considered preliminary at this stage. Larger representative datasets are required to investigate in more detail changes in the frequency of this lineage in Manaus and elsewhere.