After more than a year of the pandemic situation of COVID-19, the United Kingdom (UK), South Africa, and Brazil became the epicenter of new lineages of severe acute respiratory syndrome coronavirus 2 (SARS-CoV-2). Variants of Concern (VOCs) were...

[Updated information on the Genomic surveillance from Tocantins state, Brazil]
We report here the sequencing, assembling and the analyses of 78 new SARS-CoV-2 genomes from 22 cities in the Tocantins state. In order to construct a phylogenetic tree, we first aligned the 78 newly sequenced genomes and the reference genome as outgroup MAFFT v.7.480 [15]. The resulting alignment was subject to Maximum Likelihood phylogenetic analysis with IQ-TREE v.2.1.2 [16] under the Generalized Time Reversible GRT model of nucleotide substitution with empirical base frequencies (+F) and invariable sites (+I), as selected by the ModelFinder software. From the phylogeny, we observed two clearly distinguishable clusters composed of P.1 (also referred as Gamma lineage by the World Health Organization) and P.1.7 lineages (Figure 1). 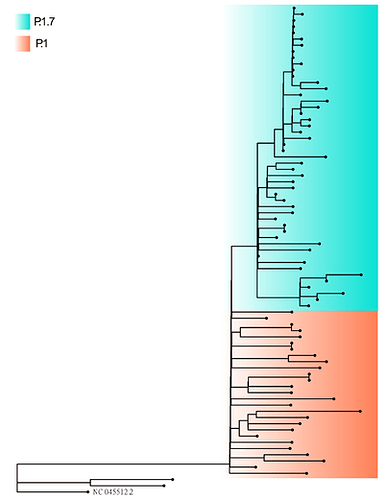 A total of four Pango lineages were observed. The most frequently detected lineage group was P.1.7 (49 sequences or 62.8%), followed by P.1 (27 sequences or 34.6%) and B.1.1 and P.1, each with only one sequence. The P.1.7 lineage contains the P684H mutation on the spike gene, which was first observed on six of the 24 sequenced genomes that have been reported previously on our paper (Figure 2). 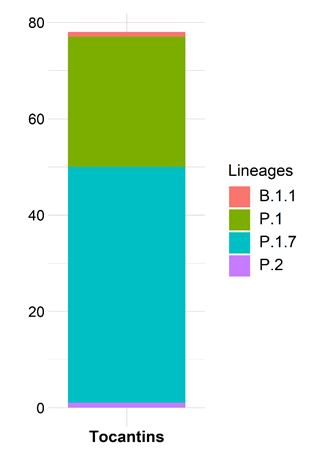 Overall, now the Tocantins state has 230 SARS-CoV-2 genomes (108 sequenced by the Bioinformatics and Biotechnology Laboratory, Campus of Gurupi, Federal University of Tocantins in partnership with LACEN-Tocantins, 84 by the Adolfo Lutz Institute and 38 by the FIOCRUZ). The Genomic analysis with Pangolin reveals nine SARS-CoV-2 lineages circulating in Tocantins state. The most abundant lineage was P.1 accounting for 49.1% (113 genomes) of sequenced genomes. The second most common lineage was the P.1.7 (33.9% or 78 genomes), followed by the P.2 lineage (6.5% or 15 genomes) and B.1.1.28 (6.1% or 14 genomes) (Figure 4). We also point out that since its emergence and spread, the P.1 lineage has quickly become the dominant circulating in Tocantins state. We also observed a growth of the P.1.7 lineage in the last three months (Figure 5).

Figure 4. Distribution of the pangolin lineages found in Tocantins state.

Figure 5. Frequency of the circulating lineages in Tocantins state.