The Beta variant of concern was first detected on 26th June 2020 in South Africa and the first genomic detection was reported on 15th December 2020 in Kenya 1. In Kenya, the Beta VOC was in high transmission early in the third wave of SARS-CoV-2 infections and was replaced over time by the more transmissible Alpha and Delta variants 2–5. The last genomic report of Beta variant was from a case that was tested on 30th July 2021 from the Rift Valley region 1,3. Recently, we detected a Beta-like variant from a single sample collected at Kilifi County Hospital in coastal Kenya during routine surveillance. This report highlights the characteristics of this Beta variant that was collected on 29th September 2022. The participant had a history of fever, cough, and runny nose at the time of presenting to the health facility with no history of international travel two weeks before sample collection. The sample was collected at an outpatient clinic with no follow-ups post-discharge.

We observed a Beta-like sequence with additional six synonymous and 16 non-synonymous mutations within the ORF1ab, ORF3a, M, and S genes (Table 1 and Figure 1). The mutations were observed in the consensus genome from both the ONT and Illumina platforms. The additional mutations observed were predominantly seen within the Delta and Omicron VOC lineages and non-VOC lineages including B.1.1.456 and B.1.1.374 (Table 1). The additional alleles observed in the newly sequenced samples had sufficient read depth (>90%) compared to the Wuhan reference (Table 1 and Figure 2).

image904×178 53.2 KB
Figure 1: An alignment showing SNPs across SARS-CoV-2 genomes from the Beta-like (K290922) genome and other genomes from Alpha, Beta, Delta, Omicron and non-VOC variants relative to the Wuhan strain. 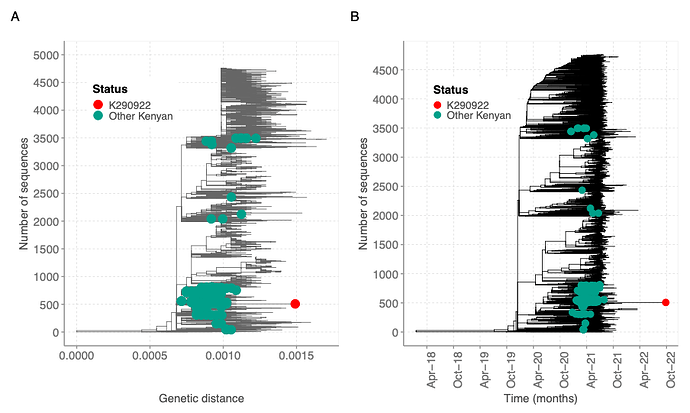 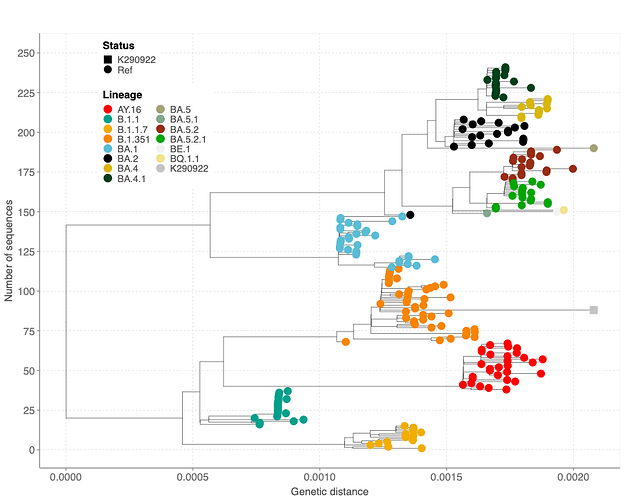 image904×722 74.5 KB
Figure 4: A maximum likelihood tree showing clustering of the Beta-like sequence (K290922) among other lineages that share mutations observed in the query sequence.

We report identification a Beta VOC-like sequence in coastal Kenya with 22 additional mutations some of which have been identified in other VOCs. This finding suggests that some of the previous SARS-CoV-2 VOCs that have been undetected for months may be still in circulation in communities albeit at low frequencies. The declining testing rates further increases the chance of being missed by low numbers of routine surveillance. We speculate that this case may have been in recent contact with someone who had continued to shed the Beta VOC over a prolonged period. The additional non-synonymous mutations observed within the spike protein in this variant have been observed in other lineages suggest possible recombination (not detected in our analysis) or convergent evolution 9,10.

This work is supported through grants from the National Institute for Health and Care Research (NIHR) (project references 17/63/82 and 16/136/33) using UK aid from the UK Government to support global health research, The UK Foreign, Commonwealth and Development Office and Wellcome Trust (grant# 220985/Z/20/Z) The views expressed in this publication are those of the author (s) and not necessarily those of NIHR or the Department of Health and Social Care, Foreign Commonwealth and Development Office.