On June 5th, 2020, we posted the first viral genome from the 2020 Equateur Province outbreak. Phylogenetic analysis indicated the cluster of cases was caused by a new spillover event and represented the 11th Ebola virus disease (EVD) outbreak in the Democratic Republic of the Congo.

As of August 14th, the outbreak has steadily increased to 88 cases and 36 deaths across nine health zones. Samples have been sent to the Institut National de Recherche Biomédicale (INRB) Pathogen Sequencing laboratory in Kinshasa for genomic analysis, and 32 additional viral genomes have been generated from four health zones: Bikoro, Bolomba, Iboko, and Mbandaka.

Samples were sequenced using an amplicon strategy developed with PrimalScheme (using MK007330 as a reference to generate the primers), followed by Illumina Nextera DNA Flex library preparation. The consensus genomes were generated using iVar. These additional genomes have full coverage of the GP gene, which was lacking in the first genome that we generated. 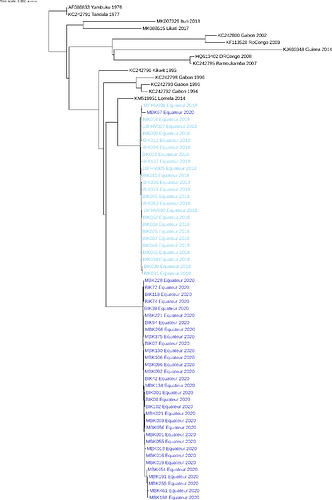 equateur-2018-2020-tree2968×4464 142 KB
Figure 1. Maximum likelihood phylogenetic tree of all EVD outbreaks, including genomes from the 2018 (light blue) and 2020 (dark blue) Equateur Province EVD outbreaks and single representatives from other outbreaks for context.

Samples from Bikoro, Mbandaka, and Bolomba health zones reveal sustained human-to-human transmission from the new 2020 Equateur Ebola virus variant (Figure 1). However, one sample from Iboko health zone, MBK067, did not cluster with the other sequences from 2020 but instead clustered with sequences from the 2018 Equateur Province outbreak (Figure 1). The 2018 Equateur Province outbreak occurred from April-July 2018 and resulted in 54 cases and 33 deaths. Iboko health zone accounted for 26 of the cases.

Despite occurring over two years after the 2018 Equateur Province outbreak was declared over, MBK067 has only 10 mutations when compared to genomes from the 2018 outbreak (with 18FHV008 being the closest genome), much fewer than expected from continuous human-to-human transmission over the same time period. The high level of similarity to previous 2018 Equateur sequences and the slowed evolutionary rate indicates that this case is likely the result of transmission initiated from a persistently infected source and, therefore, a continuation of the 2018 Equateur outbreak. However, 18FHV008 is one of the earliest cases from the 2018 Equateur outbreak, opening the possibility that MBK067 is the result of a transmission chain initiated from a second spillover from the same reservoir population.

Epidemiological reports and preliminary sequencing indicates onward transmission of this variant to at least two other cases. Further sequencing is ongoing to try and improve the coverage of these high ct samples, and to explore the genomes present in ebola-positive semen samples from survivors of the 2018 EVD outbreak, to enable more definitive analysis.

We present the first known occurrence of two EBOV variants circulating contemporaneously within the same geographical area. As the rate of EVD outbreaks increase, in-country genome sequencing will be an essential tool, in conjunction with traditional contact tracing, to help untangle these intermixing transmission chains.

Statement on continuing work and analyses prior to publication

These genomes are being shared pre-publication. Please note that these data are based on work in progress and should be considered preliminary. Our analyses of these data are ongoing, and a publication communicating our findings on these and other published genomes is in preparation. If you intend to use these sequences prior to our publication, please communicate with Drs. Muyembe-Tamfum, Ahuka-Mundeke, and Mbala-Kingebeni for coordination.

Stamatakis A. RAxML version 8: a tool for phylogenetic analysis and post-analysis of large phylogenies. Bioinformatics 2014;30:1312-3. 10.1093/bioinformatics/btu033