Following the emergence and global spread of Omicron lineage BA.5, there has been an unprecedented diversification of Omicron sublineages. In this report we describe the different evolutionary trajectories and mechanisms driving the emergence of these sublineages and give examples of the most prevalent lineages in each, covering topics such as; second generation BA.2 lineages, simple and complex recombination, antigenic drift and convergent evolution.

Since the emergence of the Omicron variant in late 2021, many regions have experienced repeated waves of infections driven by successive Omicron lineages, for example BA.1, BA.2, then BA.5. BA.1-5 are all hypothesised to have directly arisen from the same cryptic ‘Omicron reservoir’(1, 2). At present, a mix of Omicron sub-variants are emerging and growing, often coinciding with waves of infections. Here we aim to give a summary of the evolutionary mechanisms through which these new ‘post-Omicron’ lineages are emerging.

In the years since its emergence, SARS-CoV-2 has shown a apparently unique evolutionary feature relative to what is known for other common respiratory viruses – the ability to produce ‘variants’ defined by long phylogenetic branch lengths, an apparent lack of genetic intermediates and rooting within older, rather than contemporary lineages(1-3). Interestingly this may have parallels with the evolution of pandemic norovirus strains(4). This ‘saltation’ or ‘variant’ evolution is hypothesised to be the result of the re-emergence of viruses evolved during long-term chronic infections (1, 5-7). The extended duration of chronic infections may allow the virus to more quickly accumulate mutations due to the lack of a transmission bottleneck. Examples of probable saltation variants include the variants of concern (VOCs) Alpha, Beta, Gamma and the Omicron lineages (e.g. BA.1, BA.2 and BA.5)(1, 3, 8). Notably all these original variants evolved from pre-variant progenitors.

This evolutionary pattern has continued into 2022. However, unlike the first generation variants, these have largely evolved from a BA.2 background, resulting in ‘second generation variants’ - variants that have arisen from an existing variant background (Figure 1 and 2). Examples of this include lineages such as BA.2.75, BA.2.10.4, BJ.1, BS.1(9), BA.2.3.20, BA.2.83, BP.1, and DD.1. Like prior first generation variants, these lineages have numerous non-synonymous mutations, particularly concentrated in the N-terminal domain (NTD) and receptor binding domain (RBD) of the Spike (Figure 1)(10). Although worldwide sequencing efforts have been declining throughout 2022, it still appears there are no genetic intermediates sampled between these variants and their precursors (Figure 2), suggesting they too may have evolved from chronic BA.2 infections, seeded near the end of 2021 or start of 2022.

At present, BA.2.75 is by far the most widespread of the second generation BA.2 variant lineages, though this is partially due to it arising first among these lineages. BA.2.3.20 has also shown some appreciable growth in recent months. 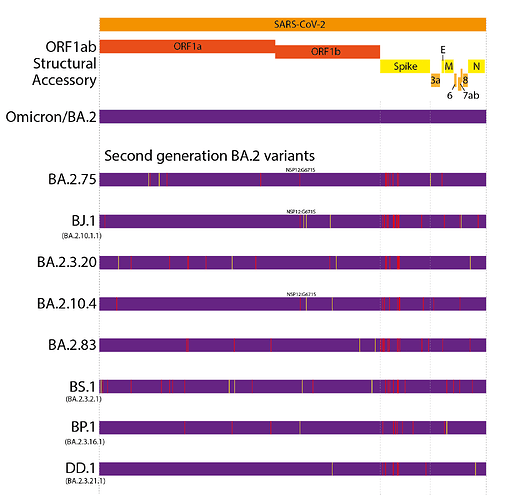 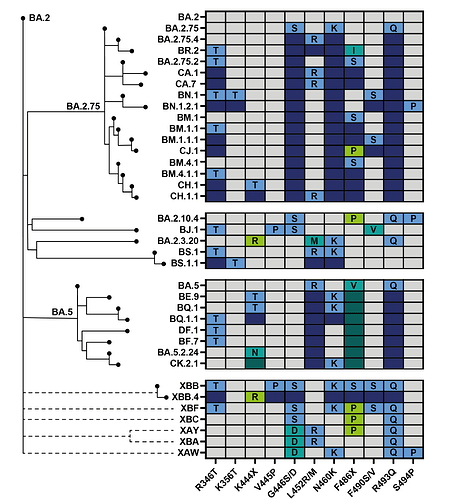 Recombination is common in coronaviruses. Ever since there has been enough genetic diversity to unambiguously identify chimeric genomes, it has been well established SARS-CoV-2 is highly prone to inter-lineage recombination(12). Generally emergence of recombinants have come when a prior wave is in steep decline and the next variant is already emerging(12). This has invariably led to these recombinant lineages being outcompeted alongside their parental lineages. However, it is well recognised that recombinants between divergent variants can contain advantageous properties unique to both parents(13)… At present (Late November 2022) there are 54 Pango-designated recombinant lineages, denoted by their X- prefix (14).

XBB is the most widespread inter-lineage recombinant to date (11). XBB is a recombinant between two saltation BA.2 lineages, BJ.1 and a BA.2.75 sublineage - most likely BM.1.1.1 (Figure 3). XBB inherited the 5’ part of its genome from BJ.1 and the 3’ end of its genome from BA.2.75, with a single breakpoint within the RBD of Spike. This Spike breakpoint allows it to possess potent antigenic RBD mutations from both BJ.1 and BA.2.75, leading it to have one of the most potent combinations of antigenic RBD mutations of any circulating variant, resulting in a relatively large antigenic distance from prior variants(15). Other notable contemporary recombinant lineages are XBD and XBF, both of which are recombinants between BA.5 and BA.2.75 sublineages (Figure 3). 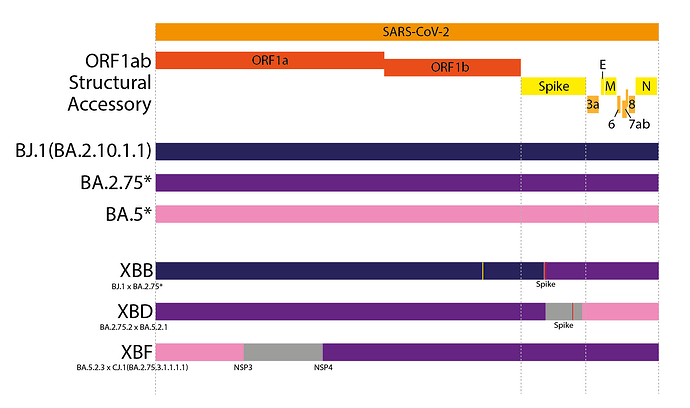 Beyond the ‘simple’ recombinants, a novel evolutionary trend has been seen in 2022, the emergence of ‘complex’ recombinants. Prior SARS-CoV-2 recombinants have been the result of recombinant events between extant, co-circulating lineages, and have tended to be the result of 1 or 2 detectable breakpoints. Complex recombinants instead are between lineages that did not widely co-circulate (in several cases Delta and BA.2), often contain far greater numbers of breakpoints (3-8), and also contain much higher numbers of ‘private mutations’ (mutations in the genome that do not appear to come from either parental lineage) compared to ‘simple’ recombinants (Figure 4). XAY and XBA, furthermore, share parts of their genomes and private mutations with one another, suggesting they likely arose from the same source(16). Other examples of complex recombinants are XAW (which has only 2 breakpoints) and, most recently, XBC.

Due to the sometimes high number of breakpoints and private mutations, and the non-contemporary parental lineages, we hypothesise that these ‘complex’ recombinants, like the saltation variants, have emerged from chronic infections. In the case of XAY, XBA, XBC, and XAW, these likely arose from chronic infections where the individual was initially infected by Delta and subsequently superinfected with BA.2. 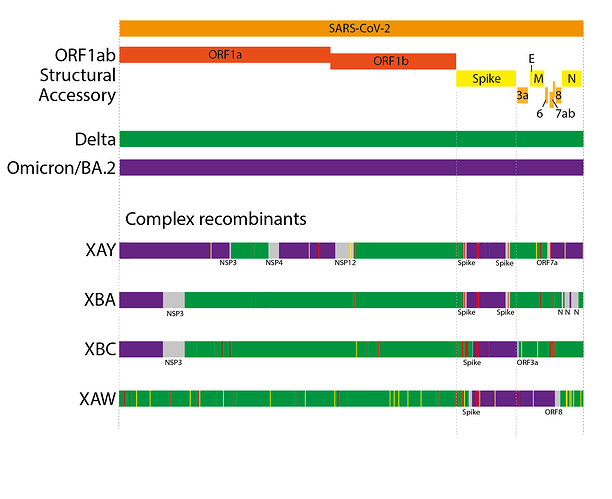 Of these complex recombinants XBC and XAY appear the most widespread. However both these lineages contain fewer antigenic RBD mutations than rapidly growing lineages such as BQ.1.1 or XBB (Figure 2), and therefore may be unlikely to compete in the long term.

By mid 2022, BA.5 had become the predominant variant globally, displacing BA.2 in most regions. Unlike previous dominant lineages, which showed relatively little accumulation of antigenic mutations once they predominated (with the closest examples being BA.2.12.1 or BA.1.1), BA.5 instead began to accumulate potent antigenic mutations in a step-wise manner - this is as opposed to the initial BA.2 sublineage saltation variants which appear to accumulate these mutations ‘all at once’. The most rapidly growing example of such lineages are sublineages of BQ.1, the largest of which is BQ.1.1, which contains 3 further antigenic mutations in its spike receptor binding domain (RBD) – the main target for neutralising antibodies in SARS-CoV-2 (Figure 2). Several other examples, with less extensive mutations have also shown recent growth, such as BA.4.6, BF.7 and BQ.1.1’s parental lineage, BQ.1(11).

Furthermore, some of the aforementioned second generation variants derived from BA.2 also show similar antigenic drift. In particular BA.2.75 has generated a huge number of sublineages that have accumulated antigenic RBD mutations by a more step-wise antigenic drift-like mechanism (Figure 2). Notable examples include BA.2.75.2, BR.2, BN.1.2.1, BM.1.1.1 and CH.1.1 all of which contains several additional antigenic RBD mutations compared to parental BA.2.75(11, 15). Overall this ‘drift’-like evolutionary pattern is much more in line with other respiratory viruses, for example step-wise antigenic drift in seasonal influenza viruses or HCoV-229E(17, 18).

One final feature common to all the previously discussed variants is the high degree of convergent evolution, particularly at antigenic RBD sites(15). Substitutions such as R346X, K444X, G446X, L452X, N460K, F486X (particularly F486P, a 2 nucleotide change), F490X and the R493Q reversion (to name a few) are present in many of these saltation, drift and recombinant lineages. Additionally several NTD changes, particularly deletions in the ~144 region are also appearing on multiple branches(15). One hypothesis for why these same sites are being selected for in so many different lineages is that these are key antigenic mutations - or possibly ACE binding enhancing sites compensating for antigenic mutations in the case of N460K and R493Q. It is thought that humoral immune responses primed with the ancestral strains (through vaccination of prior infection) and then boosted by Omicron infection specifically generates a dominant response that targets epitopes these sites reside within(15). This antigenic exposure leads to the enrichment of antibodies targeting sites that are conserved between the ancestral and Omicron lineages and these specific sites have therefore come under high levels of selective pressure leading to this observed convergent evolution (Figure 2). It is unclear if mutations such as these will continue to accumulate over time at further, less dominant sites, or whether these mutations will slow down due to fitness costs associated with further mutations.

The future of SARS-CoV-2 evolution

At present BQ.1.1, XBB and CH.1.1 appear to be the fastest growing variants globally, and are expected to drive some level of waves of infections in the coming months, either together or individually. Although these lineages contain substitutions at the same antigenic RBD residues, often the exact substitutions differ (Figure 2) - the 3 variants also have very different combinations of substitutions and deletions in their NTDs. Therefore, it is feasible immune responses elicited by these lineages may poorly cross-react with one another. Co-circulation of SARS-CoV-2 variants has generally been transient up to the present but it is possible several lineages could have similar enough growth rates, and enough antigenic distance from one another that they co-circulate, at least until a fitter lineage or variant emerges.

At present it is one year since the emergence of Omicron(1). Although all the lineages described here have genetic and antigenic distance from earlier Omicron lineages, they are still likely to continue to display somewhat similar viral, epidemiological and clinical properties to their parent lineages. However, it is entirely possible all the lineages described here would be outcompeted in the event of a second ‘Omicron-like event’ – the emergence of a brand new variant with orthogonal antigenicity from any other circulating lineages, for example from an ancestral or pre-Omicron variant genetic background. Due to its singular nature, it is extremely unclear how likely or how commonly we should expect such events going forwards, however it seems prudent to have strategies in place in the event this were to occur.

Emergence of a saltation variant from a Delta genetic background is of particular concern, although it’s entirely possible the intrinsically higher pathogenicity (19) of Delta might well have changed upon re-emergence. It should be noted that a number of Delta sequences continue to be sampled, most with large numbers of private mutations suggesting there is an existing, potentially substantial, reservoir of Delta (as well as prior variants). Such sequences most likely represent ongoing chronic infections, as exemplified by the emergence of the complex recombinants.

To conclude, it is essential for genomic surveillance and analysis of SARS-CoV-2 to continue even while other pandemic measures are phased out. As described throughout this report, the virus is continuing to evolve at pace by both predictable as well as hard to predict mechanisms, often at the same time. Equitable global surveillance, in particular will be essential for rapid responses to new variants and is currently very lacking and globally uneven (20).

The authors would like to fully credit all scientists generating and sharing sequencing data, the Pango designation committee and wider contributors for identifying and naming lineage, and the teams behind Nextstrain, covSPECTRUM, and UShER for developing tools that are used to identify and surveil lineages. The authors would also like to thank Daniel Sheward of the Karolinska Institutet, Sweden, for his valuable feedback. T.P.P is funded by the MRC funded G2P-UK National Virology Consortium (MR/W005611/1).