Following the (First draft genome sequence of Monkeypox virus associated with the suspected multi-country outbreak, May 2022 (confirmed case in Portugal)), we now release 9 additional genome sequences of Monkeypox virus causing a multi-country outbreak. These sequences were obtained from clinical specimens collected from 9 patients on May 15th and 17th, 2022 through high throughput shotgun metagenomics using Illumina technology (see details bellow), with depth of coverage throughout Monkeypox genome ranging from 38x to 508x (mean of 201x). 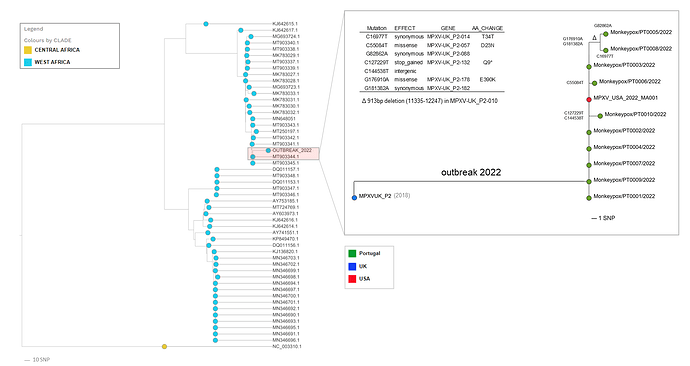 ‘*’ An additional genome ITM_MPX_1_Belgium was shared by Selhorst et al (ITM) (Belgian case of Monkeypox virus linked to outbreak in Portugal) , but is not currently included in the tree as the sequence most likely has technical issue that might render phylogenetic misplacement.

Brief description of the methods

In order to deplete host DNA, skin exudate samples were subjected to sonication and DNAse/RNAse cocktail treatment, prior to DNA extraction with the QIAamp DNA Mini kit (protocol for tissues) (Qiagen). After Nextera XT library preparation, shotgun metagenomics was performed by paired-end sequencing (2x150 bp) on an Illumina NextSeq 2000 apparatus, with about ~40M total reads per sample. Five out of the nine samples were also subjected to ONT MinION sequencing, with generated data being also used to curate the sequences.

Reads were human-depleted and subsequently mapped to the reference MPXV_UK_P2 (MT903344.1; also being used as reference in the newest Monkeypox nextstrain build auspice) using the INSaFLU platform (https://insaflu.insa.pt/). Genome sequences were further curated based on de novo assemblies and careful inspection of mutations. Submission of reads to ENA is ongoing.

Thanks for posting your new genomes here. It is interesting that all of these additional SNPs identified are also either TC → TT or GA → AA in dinucleotide context. This would support the idea that most of the single nucleotide mutations we see in these genomes are the results of host enzyme editing rather than polymerase replication errors:

Thanks. Indeed, there seems to be a pattern. The extra C187169T mutation in the (just) released sequence from Germany (MPXV-BY-IMB25241; Monkeypox virus isolate MPXV-BY-IMB25241, complete genome - Nucleotide - NCBI) is also a TC → TT.

The first 10 genome consensus sequences collected in Portugal are now also available at NCBI, under the following accession numbers. Read data was submitted to European Nucleotide Archive (ENA) and is in process to be released.

@vborges do you know when the raw read data will become available. The datasets are listed in NCBI and EBI but no actual data is available

@anekrut, we have submitted the reads to ENA 6 days ago, asking for an immediate release. Unfortunately, ENA is taking more than we would expect. We will contact ENA reinforcing if it is possible to accelerate the process.

update: ENA has just replied saying that they are facing some technical issues that prevented the browser from indexing new data. The issue is expected to be solved today or early tomorrow.

Thank you! I think proving raw data is exceptionally important for verifying assemblies, assessing the extent of intra-host variation, detection of multiple infections etc. etc… Unfortunately for the most part it seems that MPX data will follow SARS-CoV-2 path with very little raw data making its way to the public domain. Thank you for making the difference!