Introduction
Following the first suspected clinical identification of a Monkeypox case in Canada in May 2022, biological specimens from presumptive cases were submitted to the National Microbiology Laboratory (NML) in Winnipeg, Manitoba, for diagnostic confirmation and shotgun metagenomic sequencing. Cases were most often associated with ulcerated lesions and were frequently identified at sexual health clinics or as part of outreach to the gay, bisexual, and other men who have sex with men (GBMSM) communities. As with most affected countries during the 2022 human Monkeypox virus (hMPXV) outbreak, there was no previous history of hMPXV in Canada and no established methods for genomic surveillance.

Materials and Methods
Samples were extracted using the Qiagen Viral RNA mini kit. The diagnostic testing was done by qPCR using the TaqPath 1-Step RT-qPCR Master Mix, targeting B6R (MPXV-specific) and two Orthopox-specific targets. For a sample to be assessed as MPXV-positive, the B6R assay, and at least one of the Orthopox-specific assays had to be positive. An RNaseP assay was also used as a proxy to quantify the human nucleic acids and an MS2 assay was used as an extraction control.

DNA extracts were quantified with an intercalating dye, normalized, and libraries were prepared using an Illumina Nextera XT kit. Samples from skin lesions were preferentially selected, as were samples that had larger absolute differences between the MPX (B6R) Ct value and the RNAseP (RNP) Ct value (i.e., MPX Ct < RNP Ct), indicating that the proportion of viral molecules was likely to be higher relative to the host background during shotgun sequencing. Libraries were sequenced on NextSeq2000 or NextSeq 550/500 platforms and were pooled in ratios to target ~30-40 millions reads per library depending on the sequencing platform.

The metagenomic composition of each sequenced library was assessed using Kraken2 against the Standard database (release date 2021-05-17), and all generated reads were mapped against a composite reference of hg38 human genome and hMPXV Clade 2 (RefSeq NC_063383) for the purposes of dehosting. hMPXV consensus sequences were called using samtools mpileup and iVar 1.3, requiring a minimum map quality of 20, minimum depth of coverage of 10x, and minimum allele frequency of 0.7 (GitHub - phac-nml/monkeypox-nf: A monkeypox virus (MPXV) assembly pipeline using Nextflow for host-removal, reference-based assembly, and generation of sequence quality metrics for Illumina paired-end data using a shotgun metagenomic sequencing approach.). Consensus sequences were aligned to the NCBI RefSeq hMPXV genome and variants were visually confirmed, with manual editing frequently applied for a 17-bp indel spanning nt positions 150,551-150,567. To be deemed a complete genome, we required consensus sequences to be a minimum of 90% complete. By applying this threshold, the NML generated 150 complete Canadian hMPXV genomes as of August 20th, 2022 (BioProject PRJNA846794).

Curated consensus sequences were aligned using mafft v7.467 and regions of spurious alignment excised using Gblocks v0.91, resulting in a final alignment of 196,678 bp (99% of the full alignment) in 28 blocks. We used IQtree v2.2.0.3 to generate a maximum-likelihood tree from the Gblocked-alignment to compare genomes from across Canada and to contextualize the Canadian outbreak within the global hMPXV outbreak.

Results
The first 150 hMPXV genomes generated in Canada were collected May-August 2022, with all falling within the B.1 lineage, characteristic of the 2022 international outbreak. The Canadian genomes are distributed across the B.1 lineage suggesting there were likely multiple independent introductions to Canada. There do appear to be multiple hMPXV clades within the Canadian data suggestive of local transmission networks.

Notably, the 150 genomes generated by the NML originate from 128 unique Case Identifiers (IDs), with some Case IDs represented by as many as six specimens and genomes. Due to the nature of collection, it is not always clear if these represent samples collected at different time points during the course of the infection or multiple samples taken at a primary medical consultation, though both scenarios are represented in a subset of the data (Figure 1). We note that specimen genomes associated with a single Case ID differ by up to five mutations. All mutations identified between strains from the same Case IDs were consistent with antiviral deamination activities of APOBEC3, as previously identified by O’Toole and Rambaut (2022). These within-Case ID variants have all been manually confirmed and do not represent sequencing or alignment errors. Due to the shotgun sequencing approach used, PCR error is unlikely to explain these hMPXV variations, although co-infections cannot be ruled out at this time. 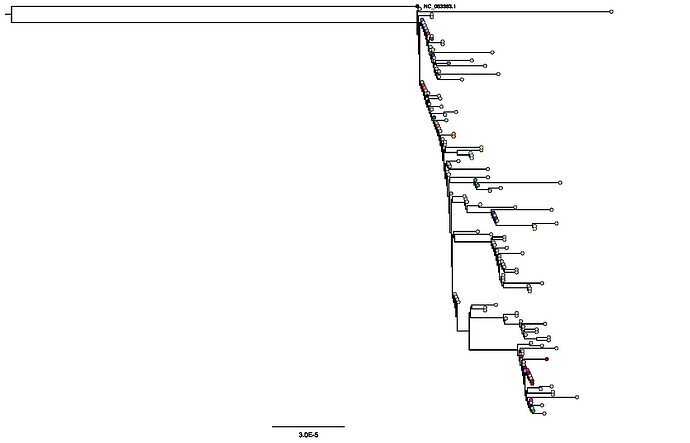 Figure 1: 150 NML-generated hMPXV genomes identified by CaseID and rooted with a 2018 hMPXV strain from Nigeria (NC_063383.1). Samples originating from a CaseID with multiple genomes are coloured according to CaseID. Samples identified in grey represent unique CaseIDs.

Discussion
The first 150 hMPXV genomes generated in Canada were associated with the B.1 lineage, confirming their connection to the extensive hMPXV outbreak and global dissemination during the spring of 2022. The presence of viral mutations consistent with APOBEC3 antiviral activity further connects these strains to the human-to-human transmission of hMPXV ongoing since at least 2018. Clusters observed within the Canadian data that are further differentiated by APOBEC3 mutations lend support to the proposed increased mutation rate for Clade 2 hMPXV. This increased viral mutation rate appears to be in response to selective pressure from the human innate immune system. Although the observation of unique strains within individual patients means that genomic surveillance for hMPXV transmission tracking may be complicated by intra-host diversity, this ongoing outbreak analysis presents a unique opportunity to better study viral evolution under selective pressure by the human immune system.