Correspondence should be addressed to SKP and AN.

In an age of digital connectedness, open, accessible, globally shared data and analysis platforms have the potential to transform the way biomedical research is done, opening the way to ‘global research markets’, where competition arises from deriving understanding rather than access to samples and data. The fields of astronomy and high energy physics have demonstrated the benefits of global data generation and sharing. We have the opportunity to mirror their successes in infrastructure funding by showing how biological research can embrace the same global perspective on common infrastructure investment and data sharing. (A. Lonie from Baker et al. 2020).

Already, there are over 250,000 SARS-CoV-2 short read sequencing datasets in NCBI Short Read Archive, and the rate of deposition is not slowing down. “Big data” settings require “big data” solutions – something that human genomics had to deal with from the outset, and pathogen genomics is facing at the moment. We describe a fully open end-to-end analytic framework for standardized reproducible high-throughput analysis of these data on public computing infrastructure. Using high quality datasets from two studies, we describe patterns of variation detectable in SARS-COV-2 intrahost data and
analyze them in the context of N501Y lineages and sites under selection. In particular, we identify a subset of variants present in the N501Y lineages that were detectable at low frequencies in individual hosts prior to the emergence of these lineages. Our results suggest that intrahost dynamics, which did not receive significant attention during this pandemic, should be an integral part of any serious pathogen surveillance effort.

This document is a part of an ongoing effort. We will be posting updates as it progresses.

Science has been put on a war footing in response to the Covid-19 pandemic. There are now over 100,000 publications and preprints (>500/day) on SARS-CoV-2 and COVID in PubMed. While the sheer scope of this effort is remarkable, it also exposes two categories of challenges in how the biomedical research community is responding to a life-changing global health crisis.

In this report we detail how we are attempting to address these issues by building a free globally distributed SARS-CoV-2 analysis network based on the Galaxy and Datamonkey data analysis platforms. We address the technical challenges by demonstrating how publicly accessible analysis workflows can be applied to large collections of SARS-CoV-2 data without the need to procure or maintain computational infrastructure.

Next we address the biological challenges by analyzing a subset of large raw read SARS-CoV-2 datasets derived from RNAseq and Ampliconic experiments. We demonstrate that a number of recently emerged substitutions observed in the “N501Y” lineages from the UK, Brazil, and South Africa data, have been detectable at low frequencies within individual hosts for some time.

Our work establishes a global genomic data analysis portal for monitoring global health emergencies such as the current COVID-19 crises and any future events of similar magnitude.

Goals of this study

We are the developers of two widely used data analysis frameworks: Galaxy and HyPhy/Datamonkey. Together we provide free powerful infrastructure for analysis of data to anyone in a world with an Internet connection. In 2020 we joined forces in tuning our tools to the needs of SARS-CoV-2 research.

Galaxy is a general web-based data analysis framework for analysis of large biological (as well as climate, ecology, natural language processing and others) datasets. This framework is used to deploy global data analysis instances collectively known as Usegalaxy.* Consortium. The “big three” Galaxy instances in this coinsortim are in the US (usegalaxy.org), Europe (usegalaxy.eu), and Australia (usegalaxy.org.au). The tool sets, workflows, and reference data are synchronized across major instances.

Anyone in the world can freely use Galaxy. Every user receives 250 Gb allocation at signup. Every instance has mechanisms for accommodating users who require bigger allocations. Every major Galaxy instance is backed by robust national high performance computing (HPC) infrastructure. In the US usegalaxy.org is based at the Texas Advanced Computer Center (TACC). It utilizes a variety of XSEDE resources such as JetStream cloud and Bridges shared memory system. European and Australian instances are supported by massive computational resources available through deNBI, Elixir and Nectar Cloud.

Galaxy is a major part of biological tool ecosystem. Almost 8,000 analysis tools have been incorporated into Galaxy. This is achieved through close partnership with BioConda and Biocontainers communities. Workflows assembled from these tools are curated and supported through a variety of mechanisms including DockStore and Elixir workflow hub.

HyPhy (Hypothesis Testing using Phylogenies) is an open-source software package for the analysis of genetic sequences (in particular the inference of natural selection) using techniques in phylogenetics, molecular evolution, and machine learning. It features a rich scripting language for limitless customization of analyses. Additionally, HyPhy features support for parallel computing environments (via message passing interface). HyPhy has over 10,000 registered users and has been cited in over 4,500 peer-reviewed publications (Google Scholar).

Everything discussed in this piece is fully open and reproducible. The analysis was performed in several stages:

Notebook for this section is available here

. Gzipped SRA RunInfo dump for January 20, 2021 can be downloaded here. This file was used to generate the tables and heatmap below.

As of late January 2021 the sequence read archive (SRA) at the US National Center for Biotechnology Information (NCBI) contained 190,288 raw read datasets summarized in Fig. 1: 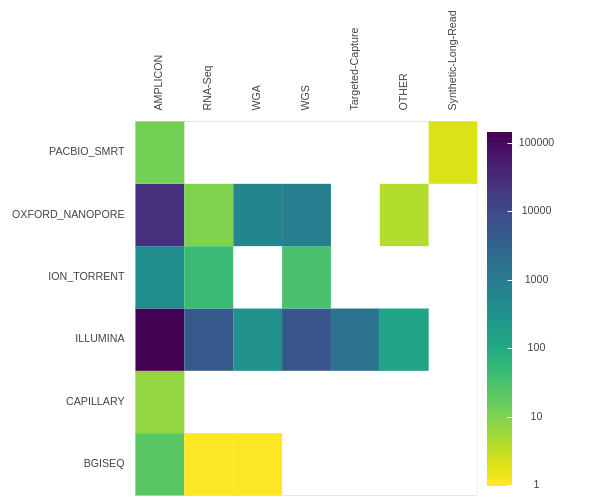 While SRA metadata are not perfect (e.g., term WGA, whole genome amplification, is likely equivalent to Amplicon) the table shows three primary types of data: (1) Illumina-based Ampliconic, (2) Oxford nanopore (ONT)-based Ampliconic, and (3) Illumina-based RNASeq. Of these three types of studies, Illumina-based RNASeq is the most suitable for accurate assessment of the intra-host variability. This approach avoids amplification biases characteristic of PCR-based enrichment approaches such as PrimalSeq—a primary methodology used to generate Illumina- and ONT-based ampliconic datasets. However, because one of the key objectives of this study is to provide freely accessible workflows for the analysis of SARS-CoV-2 variation data we developed procedures for leveraging ampliconic data as well. Thus we describe two distinct analytical strategies: for Illumina-based RNASeq data and Amplicon data. We have also developed workflows for the analysis of ONT data. However, these will be described in a separate report.

Next, we identified the largest studies—containing the largest count of individual read datasets—for each of the two (Illumina RNA-seq and Illumina ARTIC) experimental approaches:

From each set we selected a single study that has been published. This is because metadata for SRA datasets is generally of low quality and having a publication allows for much better understanding of the corresponding data (e.g., which ARTIC primer set version was used; how RNA was isolated and so on).

The entire PRJNA622837 has been conducted prior to emergence of N501Y lineages. The PRJEB37886 contains samples isolated before and after N501Y emergence. Thus we separated this dataset into two parts. In the end we analyzed the following datasets:

These nicknames are used in the remainder of this document to refer to these datasets.

We developed four analysis workflows to support identification of variants from all relevant input data sources (Table 2). They are available on all major worldwide Galaxy instances as well as from DockStore and WorkflowHub.

The two Illumina RNASeq workflows (for paired-end and single-end sequenced data) perform read mapping with bwa-mem and bowtie2, respectively, followed by sensitive variant calling across a wide range of AFs with lofreq (which we previously identified as the most appropriate tool for this task).

The workflow for Illumina-sequenced ARTIC data builds on the RNASeq workflow for paired-end data using the same steps for mapping and variant calling, but adds extra logic for trimming ARTIC primer sequences off reads with the ivar package. In addition, this workflow uses ivar also to identify amplicons affected by ARTIC primer-binding site mutations and excludes reads derived from such “tainted” amplicons when calculating allele-frequencies of other variants.

The workflow for ONT-sequenced ARTIC data is modeled after the alignment/variant-calling steps of the ARTIC pipeline. It performs, essentially, the same steps as that pipeline’s minion command, i.e. read mapping with minimap2 and variant calling with medaka. Like the Illumina ARTIC workflow it uses ivar for primer trimming. Since ONT-sequenced reads have a much higher error rate than Illumina-sequenced reads and are therefor plagued more by false-positive variant calls, this workflow does make no attempt to handle amplicons affected by potential primer-binding site mutations.

All four workflows use SnpEff, specifically its 4.5covid19 version, for variant annotation.

The fifth, Reporting, workflow takes table of variants produced by any of the other four workflows and generates a list of variants by Samples and by Variant. For an example see here.

The five workflows are designed to work in the following order: 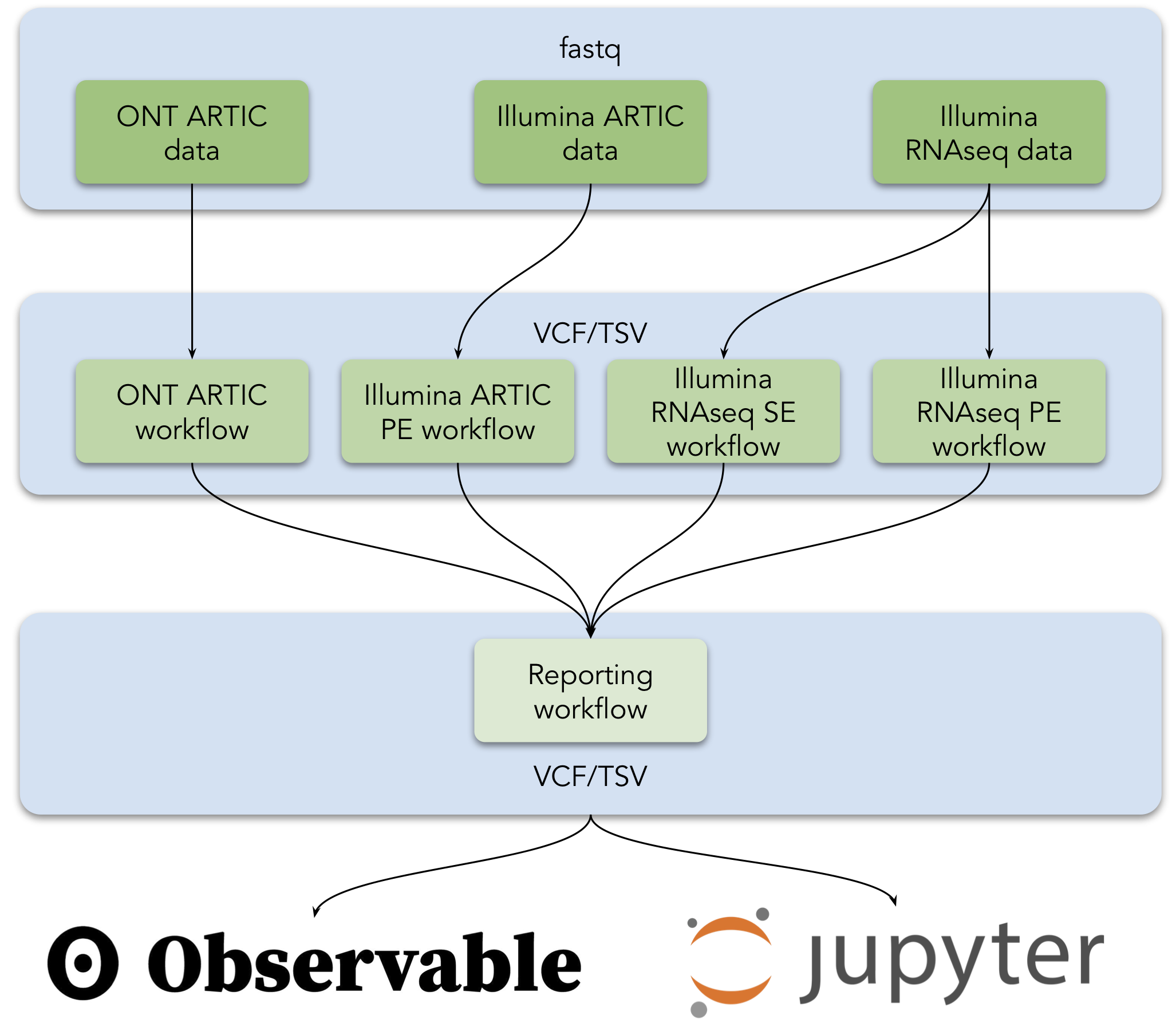 The result of an intra-host variation analysis is a list of called differences from the reference SARS-CoV-2 genome, their estimated allele frequencies, technical metrics reported by variant callers, and functional annotation. The list of variants is a large and complex data set in its own right.

The datasets listed in the table below are produced directly by our Galaxy workflows using only publically available reference data and raw Illumina reads downloaded from NCBI SRA as the input. Specifically, the Reporting Workflow generates two types of reports for each dataset:

On top of these tables, we provide raw data and exploration visualization tools for the interested reader, qualitative descriptions of the type of variation found, and in-depth discussion of several key variants and sets of variants.