Here we report the whole-genome sequence of a monkeypox virus strain isolated from a male patient on May 20, 2022. After traveling back from Belgium and Germany to Israel, he was hospitalized with pox-like lesions. Pustule swab samples were analyzed by PCR, according to the method described by Shchelkunov et al. [1] and were positive for MPXV (West African clade).
A whole genome sequencing was performed using the Illumina platform. A Nextera XT paired-end library (Illumina) was prepared using 1 ng of DNA extracted from the patient’s pustule swab, using a QIAamp DNA mini kit (Qiagen). The library was sequenced on the MiSeq platform using paired-end sequencing, with a read length of 150 nt and a mean insert size of 215 nt. Quality control and trimming of the raw reads were performed using TrimGalore [2] with default parameters. Human reads were filtered out using bowtie2 [3] and samtools [4]. This produced 1,071,598 clean monkeypox paired-end reads out of 16,262,769 total reads (6.5%), with 1300x coverage in mapping to MPXV genomes. The paired-end reads were de-novo assembled using SPAdes assembler v3.13.0 [5] with the --careful parameter. For manual curation and validation, the paired-end reads were mapped to the genome MPXV_USA_2022_MA001 (accession no ON563414). The complete sequence, MPXV_ISR001_2022, consists of 196,753 bp (G+C content, 33.1%), was submitted to NCBI GenBank and is available under accession no ON649879.
In a phylogenetic analysis, the genomic sequence of MPXV_ISR001_2022 was compared to all publicly available complete MPXV genome sequences in the NCBI database as of June 2, 2022. Multiple sequence alignments were carried out using MAFFT v7.490 [6] and a maximum likelihood phylogenetic tree inference was applied using RAxML v8.2.11 [7] with default parameters. Phylogenetic tree display was implemented using Interactive Tree of Life (iTOL) v6 [8]. The MPXV_ISR001_2022 sequence is clustered with the current 2022 published MPXV sequences and harbors the pattern of dinucleotide changes described by O’Toole & Rambaut [9]. The sequence revealed 47 substitutions in comparison to a 2018 representative genome (Israel_2018). 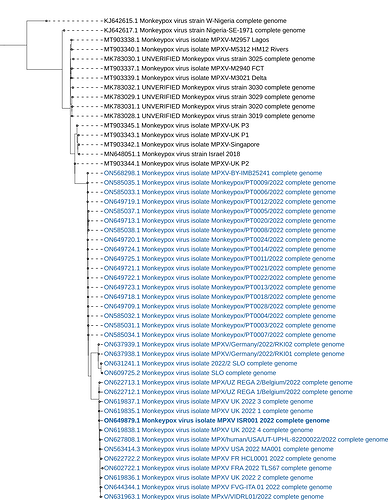 Figure1. Phylogenetic tree of representative genomes not associated (black) and all available genomes associated (blue) with the 2022 multi-country MPXV outbreak, including MPXV_ISR001_2022 (in bold).