Belgian case of Monkeypox virus linked to outbreak in Portugal

Monkeypox virus (MPXV) is a zoonotic virus that circulates in a yet unidentified animal reservoir in Africa with humans and primates being considered incidental hosts. The virus belongs to the same genus as the variola virus, which causes smallpox, and presents with a similar presentation of a febrile prodrome and a characteristic rash. A case fatality rate of up to 10% in children has been reported, but is much lower in adults.
Although MPXV is usually constrained to small outbreaks in remote parts of Central and West African countries, with cases elsewhere mostly linked to Africa travel, several cases of monkeypox virus are recently and increasingly being detected around the world (United Kingdom, Portugal, Spain, Sweden, Italy, Canada, Belgium, Australia, France, Germany, and the USA). This raises concerns about increased human-to-human transmission and necessitates urgent investigation into the underlying causes.
Here we report the nearly full genome of a 30-yr old male case in Belgium with a travel history to Lisbon, Portugal who presented to the ITM STI clinic on May 13th with perianal papules and 1cm painful inguinal adenopathy bilaterally. His partner since developed similar symptoms. Initial investigations of a sample taken from the lesions were negative for Herpes Simplex Virus and Treponema pallidum. Upon international alerts on MPX cases in Europe, additional analyses for MPXV returned positive (Ct of 16) with a MPXV qPCR using the generic G2RG_G primers (Li et al., 2010). Whole genome sequence data was obtained using an untargeted metagenomics approach, including a sequence-independent single primer amplification step, on Oxford Nanopore’s minION platform. We could reconstruct 98.9% of the genome with an average depth of 18.9x. Preliminary phylogenetic analysis clearly shows that the obtained genome belongs to the West African clade of MPXV and is most closely related to the recently uploaded genome from the outbreak in Portugal providing further evidence of substantial community spread in Europe. 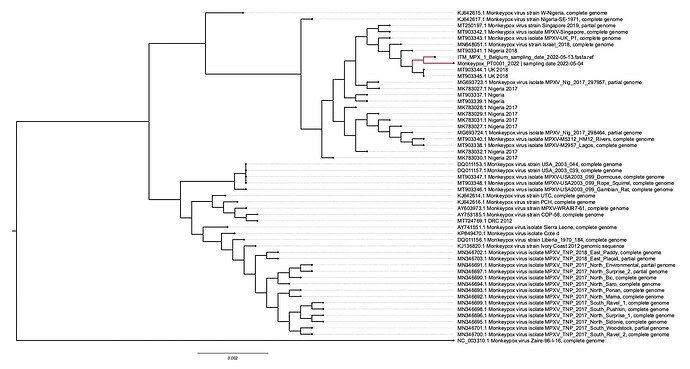 The above phylogenetic analysis was performed by core alignment (using parsnp) of unambiguous regions from a rapid alignment of the newly sequenced genome with the publicly available genomes selected by Isidro et al (https://virological.org/t/first-draft-genome-sequence-of-monkeypox-virus-associated-with-the-suspected-multi-country-outbreak-may-2022-confirmed-case-in-portugal/799). The Belgian and Portuguese sequence are depicted in red and clusters with sequences from a Nigerian 2018 outbreak which was exported to the UK, Israel, and Singapore.

Thanks to ITM, Antwerp, and INSA, Lisbon for the excellent and quick delivery of this information. The “coding region” analysis for both draft sequences shows that there appear to be no differences among these two genomes and the UK, Singaporean, and Israel isolates originated from the 2018 exportation from Nigeria.
For additional granularity, it would be essential to focus sequencing efforts on characterizing the short-tandem repeat areas (located around bases 70-500 and 197600-197200 in MPXV-COG_2003 (Esposito, JJ, et al 2006; Shehelkunov SN, 2002; Wittek R, 1980; Gubser C, 2002; Kugelman, JR, 2014). While these areas of the genome are difficult to analyze and assemble, their very high variability allows for fine granularity and differentiation of very close genomes.

@gustavo_palacios - I agree that for genomic epidemiology, a sequencing protocol that focuses on these repeat regions might be useful - presumably a long-read approach that spans the regions. There is variability in the clade for this region of AT repeats (even between MA001 and PT0001) but the sequencing groups would need to dig in to the raw read data to see if the repeat length is being reliably sequenced and called. Phylogenetics of repeat length is challenging too.

There is a 16-mer repeat starting around 4800 but this may be even more challenging to sequence without long reads spanning the region.

@arambaut - Yes, it is not an easy task, but I think that we would be better by focusing our efforts on that once that we have a good idea of the variants that are circulating in every country and how they are related.

I agree with you that the pattern of changes that result in non-synonymous changes is also relevant, and it opens new questions about viral restriction factors & evolution.

What I think is the more important task now is to focus on the regions of high variability (the Short tandem repeats) that might give us clues about the ongoing H2H transmission.

I would target those areas with PCR assays flanking the left and right specific sequences to get good sequencing coverage of the intermediate area by long-read sequencing.

It would be hard to sequence and assemble, and it will probably show intrahost variation.

Region 1, which has a repeat of around ~15bp (TGACTTAACTAACTTA repeat), and region 4 (repeat of 50bp) are the more likely to give good results. Region 2 repeat is “AT” and region 3 is a 9bp repeat (ATTATATAC). Those are probably highly challenging for sequencing but it would pay off by allowing tracking.

We have used this approach previously in the DRC with success.

Genomic variability of monkeypox virus among humans, Democratic Republic of...

I believe Marion Koopmans and Guy Cochrane were discussing in following up on this at ITM. But a concerted effort would be needed for success.

ITM001_v2.zip (52.6 KB)
Hereby an updated version of our Belgian MPX ITM001 genome. This consensus sequence was manually curated using the output of two consensus generating pipelines (in-house and genomedetective.com). Discrepancies were solved by calling the base that agreed with the epidemiologically-linked genomes (eg PT001_v2). Homopolymer errors and some private mutations remain an issue due to low depth on Nanopore. Therefore, an Illumina-confirmed sequence with higher quality and depth will follow.