A draft of the first genome sequence of Monkeypox virus associated with the multi-country outbreak in May 2022 from the Canary Islands, Spain

Introduction
Monkeypox virus (MPXV) is a zoonotic Orthopoxvirus (OPV) (family Poxviridae) [1,2], endemic to West and Central Africa [3,4]. MPXV has been described in humans in Central and Western Africa (occurring mainly in tropical forest areas of Central Africa), as well as in other parts of the world [5-10]. Around the 13 May 2022, MPXV cases were reported in several countries and WHO declared communitary transmission of the virus [11]. Most reported cases so far have been presented through sexual health or other health services and have involved mainly men who have sex with men [12,13]. By early June 2022, 129 viral genomes had been deposited at GISAID with 46 SNPs shared by all these sequences and differing from the viral genome sequences from the 2018-2019 MPXV outbreak [14]. Preliminary data from polymerase chain reaction (PCR) assays indicate that these MPXV strains detected in Europe and other non-endemic areas belong to the West African clade [15].

Sequencing
Five independent DNA dual index libraries (one for each sample) were processed at ITER with Nextera XT DNA Library Preparation Kit (Illumina Inc.), following the manufacturer’s recommendations with manual library normalization, and pooled prior to sequencing. The quality of the libraries was assessed with a D1000 ScreenTape kit on the 4200 TapeStation System (Agilent). Library concentrations ranged from 7.4 to 10.4 nM, and showed a fragmentation profile ranging from 721 to 808 bp. The mean fragment size for the sequencing pool was 677 bp as measured with a D1000 High Sensitivity ScreenTape kit. Paired-end sequences were obtained on a MiSeq Sequencing System (Illumina Inc.), using the reagent kit v3 chemistry with 150 cycles and an expected throughput of 3.3-3.8 Gb. The pool concentration was 15 pM, and 5% of PhiX Control V3 was used as the internal control.

In addition, DNA libraries for nanopore sequencing were prepared from the sample with the highest yield (taken from a skin lesion exudate) using the Rapid Barcoding kit (SQK-RBK004) from Oxford Nanopore Technologies (ONT). To increase the quantity of the starting material, the protocol used 30 to 45 ng of the DNA extract in 7.5 μl for 12 independently barcoded libraries that were pooled in order to obtain the maximum yield from the run. The pooled libraries were loaded onto an R9.4.1 flow cell and were run in a MinION (ONT) for 42 hours. Basecalling of raw ONT signal data as well as demultiplexing and adapter trimming was carried out using Guppy v.6.0.7 with default parameters and the high-accuracy basecall model.

Bioinformatic and phylogenetic analyses
As the first step, the individual demultiplexed FASTQ pair of Illumina files were interleaved with BBMap (Reformat tool) and then merged into a single interleaved FASTQ file. Then two different bioinformatic tools were tested to identify and remove human reads: Kraken 2 and NCBI SRA Human Scrubber v.1.0.2021_05_05.

On the one hand, a reference-based analysis was conducted with Illumina unclassified reads that were mapped to the MPVX viral genome MPXV-UK_P2 (GenBank MT903344.1) by means of minimap2 v.2.24-r1122. At this stage, duplicate metrics from PICARD v.2.18.7, and coverage metrics from SAMtools v.1.6 and mosdepth v.0.3.3 were obtained from the remaining interleaved paired-end reads.

Variant calling was carried out with iVar v1.3.1 and LoFreq v.2.1.5 using default parameters against the MT903344.1 genome. The consensus sequence in FASTA format corresponding to the Illumina sequencing experiment was obtained by piping a SAMtools v.1.6 pileup with iVar v.1.3.1 consensus as described elsewhere [20].

On the other hand, a hybrid de novo assembly was obtained combining the filtered Illumina and ONT reads using an in-house script based on the Unicycler v.0.5.0 assembler. Quality control parameters for the draft assembly were obtained with QUAST v.5.0.2 using the MT903344.1 as the reference genome. Bandage v.0.9.0 was used to visualize the resulting contigs in the assembly. A refined version of the hybrid de novo assembly was obtained after running Kraken 2 v.2.1.2 with PlusPF database to remove non-viral assembled contigs.

The Illumina-derived consensus sequence was aligned with 137 MPXV sequences downloaded from NCBI GenBank (table 1) using MAFFT v.7.505. A phylogenetic analysis was performed using both IQ-TREE v.2.2.0.3 with the K3Pu+F+I model as best-predicted model and default parameters, and Nextstrain monkeypox.

Results
The Illumina sequencing run produced 3.88 Gb and 25.5 M reads in total. A mapping of 101,814 and 100,897 Illumina reads were obtained using minimap2 on the NCBI SRA Human Scrubber (mean depth: 38.3x) and Kraken 2 (mean depth: 38.1x), respectively, thus providing equivalent results. mosdepth showed that 99% of the MPXV genome was covered ≥1x, while a fraction of 85% of the genome was covered at ≥10x. PICARD estimated as few as 2.81% of duplicated reads. The resulting consensus FASTA for Illumina-only reads provided a near-fully complete viral genome (99.91%) against the MT903344.1 reference. This genome has been released through the GenBank repository with accession (ON782055) and at our GitHub project repository.

A hybrid de novo assembly based on Illumina and ONT Kraken 2-filtered reads performed with Unicycler provided four contigs. Contigs 1 and 2 expanded 186,315+4,703 bases (191,018 bp total) and mapped to Monkeypox virus Zaire-96-I-16, whereas contigs 3 and 4 expanded 10,530 bases but did not map to MPXV. A consensus sequence from the hybrid de novo assembly and the MT903344.1 MPXV reference genome has been deposited in GenBank with accession (ON782054) and is also available through our GitHub project repository.

A preliminary phylogenetic analysis (Fig. 1) shows that the draft MPXV genome of the patient belongs to the so-called West African clade or B.1 [21,22]. In addition, the closest sequences are related to the Slovenian-MPXV GenBank-released genomes, contributing further evidence of community spread in the present worldwide MPXV outbreak. 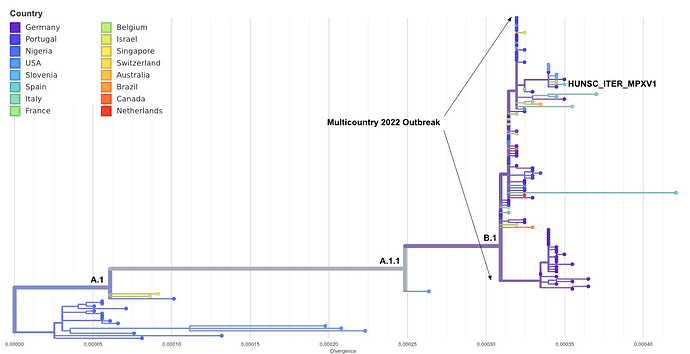 Figure 1. A phylogenetic tree depicting the draft MPXV sequence isolated on May 31, 2022 from a patient from the Canary Islands along with NCBI GenBank publicly available sequences computed by a Nextstrain monkeypox local instance.

Data Availability
A table (table 1) with the acknowledgement and accession numbers used for phylogenetic analysis shown in Fig. 1 is also available in: GitHub - genomicsITER/monkeypox: Monkeypox public repository. A FASTA file with multiple sequences of MPXV from NCBI GenBank used in the Multiple Sample Aligment step with MAFFT or Nextstrain-monkeypox is also avaiable in: GitHub - genomicsITER/monkeypox: Monkeypox public repository

Hi, could you confirm that ON782055 and ON782054 are from the same sample but were sequenced and assembled differently?

Hi Yu,
Yes, they belong to the same patient but were obtained as described in the post. One of the accessions corresponds to a FASTA consensus sequence obtained from Illumina-MiSeq and mapped to the reference; and the other accession shows the FASTA sequence resulting from a hybrid de novo assembly combining Illumina-MiSeq short-reads and MinION long-reads.

The full pipeline describing the steps is shown here: 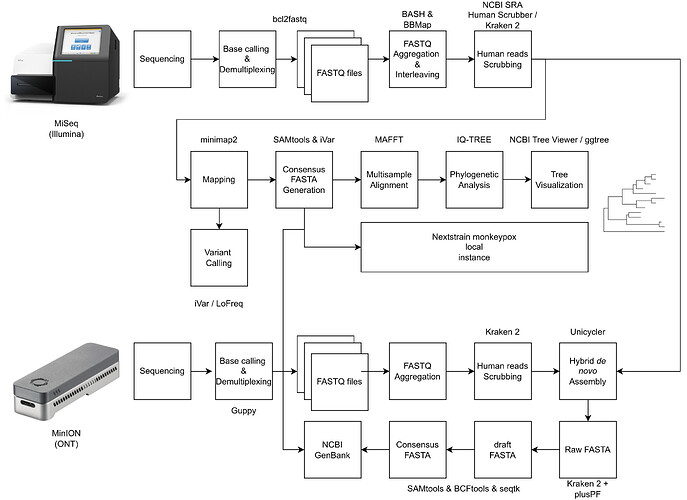 Thank you!
There are 5 SNPs over 5 kb sequences at the right terminal end of the genomes between ON782055 and ON782054. are those differences real or due to different sequencing method or assembling?

And yes, it is a consequence of the de novo assembly since the small contig of MPXV assembled in this region has not a good mapping quality (though it blasted to MPXV), and the MPXV reference used for the consensus. In addition, you can see that our deposited sequences are incomplete genomes at the right terminal end because of the reference used to map (in the case of short-reads) and to hybrid de novo assemble the sequences (MT903344). However, the coverage at this terminal is quite good for the short-reads derived sequence to perform a variant calling (work in progress).