Sequencing the SARS-CoV-2 genome has massively aided the effort to understand and contribute to the control of the COVID-19 pandemic, through comparative genetics and molecular epidemiology. However, due to the very limited sampling of closely related non-human coronaviruses, the origin of some genomic regions remains an open question. One region that has probably attracted the most interest and speculation is the polybasic furin cleavage site insertion in the Spike open-reading frame of SARS-CoV-2, absent from all closely related Sarbecoviruses sampled to date (Andersen et al., 2020).

The most notable effort to identify the origin of this furin site has been made by William Gallaher (2020), suggesting a copy-choice recombination error between the proximal ancestor of SARS-CoV-2 and a yet unsampled betacoronavirus. This is based on detectable sequence homology between the SARS-CoV-2 oligomer insert and a downstream region of another bat coronavirus genome, HKU9-1. Could this recombination event have occurred within the SARS-CoV-2 Sarbecovirus lineage? While investigating the sequence similarity between the SARS-CoV-2 genome and the newly sampled RmYN02 sequence (Zhou et al., 2020) we identified an overlooked fragment of sequence homology with the SARS-CoV-2 furin site, providing a clue about the likely sequence this recombined from (MacLean/Lytras et al., 2020).

RmYN02, although a recombinant, is the closest known relative of SARS-CoV-2 for the majority of its genome (Zhou et al., 2020), with an estimated divergence in the 1970s (MacLean/Lytras et al., 2020). Interestingly, RmYN02’s genome has a long region encompassing the first half of the Spike ORF (Zhou et al., 2020), acquired by recombination from a currently unsampled viral lineage (we designate clade X). Part of this recombinant region is where the sequence corresponding to the SARS-CoV-2 furin site is (Figure 1). Considering the period of time (decades) since RmYN02 and SARS-CoV-2 shared a common ancestor - and the clear recombination evidence between RmYN02 and unknown clade X virus - these viruses must have co-circulated in the bats in the same geographical location, and occasionally co-infected the same individuals. 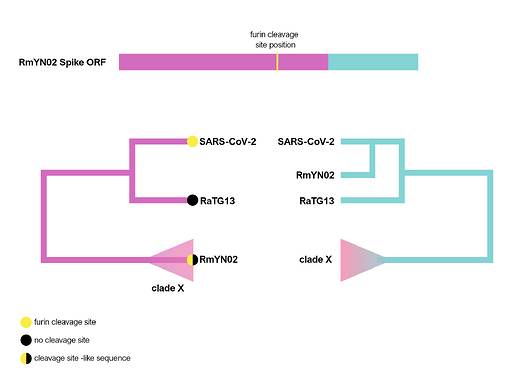 furin_tree22000×1444 103 KB
Figure 1. Schematic of the RmYN02 Spike open-reading frame (top) with recombinant regions highlighted in magenta and blue. The position of the furin site is annotated in yellow. The alternative evolutionary histories are shown for each sequence region (bottom). Tip labels on the 5’ tree represent the presence/absence of the furin-like sequence. The hypothetical clade X is shown.

When aligning the furin site region between RmYN02 and SARS-CoV-2, most alignment algorithms would show the furin site sequence as the inserted region (Figure 2A). However, there is clear nucleotide sequence identity between the RmYN02 sequence (AACTCACCTGCAGCG) and the SARS-CoV-2 furin site region, despite the larger number of gaps under this alignment (Figure 2B). Given that the unsampled clade X viruses recombined with SARS-CoV-2’s sister lineage, RmYN02, we propose that the furin site insertion was acquired from a clade X virus when co-infecting the same individual. This would indicate the recombination event giving rise to the important furin cleavage site probably arose in a co-infected bat host, although we can’t discount this taking place in a co-infected intermediate species or even human host (MacLean/Lytras et al., 2020). 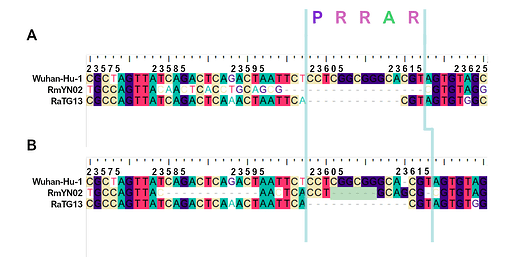 furin_alignment_fig1232×630 93.9 KB
Figure 2. Alternative alignments of the SARS-CoV-2 reference sequence (Wuhan-Hu-1) with RmYN02 at the furin site region. The low sequence identity from positions 23,585 to 23,599 between Wuhan-Hu-1 and RmYN02 (panel A), relative to the alternative alignment (panel B), shows there’s a homologous region to the furin cleavage site present in RmYN02 (positions 23603 to 23615). This indicates the inserted region in the SARS-CoV-2 progenitor was acquired by recombination in a host co-infected with divergent Sarbecoviruses. RaTG13 is also included for clarity. Nucleotide coordinates are mapped to the Wuhan-Hu-1 whole genome sequence. The putative deletion of nucleotides in RmYN02 are highlighted in green.

Coronaviruses have a more sophisticated polymerase complex than most RNA viruses, and utilise RNA folding to maintain their very large genome size (Sola et al., 2015). Recombination patterns among coronaviruses and Sarbecoviruses in particular, are evident and abundant when examining the genomes of sampled viruses (Boni et al., 2020). Yet, the exact mechanisms through which these frequent recombination events take place between Betacoronaviruses have had little mention in the recent SARS-CoV-2 literature.

A hint to the molecular mechanism responsible for the furin insertion is a previously documented phenomenon in many coronaviruses called ‘leader-switching’. This is when a ‘leaderless’ defective interfering coronaviral RNA (lacking the short sequence required for transcription regulation) acquires a leader sequence from a heterologous coronavirus in a cell during negative RNA synthesis (Chang, Krishnan and Brian, 1996; Stirrups et al., 2000; Ke, Liao and Wu, 2013). We propose that a similar polymerase crossover event produced the insertion in a bat co-infection with the proximal SARS-CoV-2 ancestor and a clade X virus (Animation 1).

The palindromic sequence right before the furin insertion in SARS-CoV-2 (CAGACTCAGACT) is a very likely culprit for why this template switch event happened (Gallaher, 2020). When the helicase encountered this folded RNA tandem repeat, the polymerase temporarily dissociated from the pre-SARS-CoV-2 template, continuing negative RNA synthesis at the homologous coordinates of the clade X genome template co-infecting the cell. The two single nucleotide gaps on the 3’ of the furin site in each viral sequence can be explained by slippage when the polymerase switched to the heterologous sequence, i.e., continuing synthesis from the A (position 23614 corresponding to the SARS-CoV-2 reference, Figure 2). Six in-frame nucleotides encoding for two arginines (CGG CGG) are also missing from the RmYN02 genome (Figure 2B). These have presumably been deleted in RmYN02 (or one of its ancestors) since the recombination event with the clade X virus or represent polymorphisms between the clade X strain that recombined with the RmYN02 ancestor and the one possessing the furin site -like template sequence.

We are unlikely to determine the exact molecular event responsible for the furin cleavage site insertion in SARS-CoV-2. However, as we demonstrate here, we should be able to infer the process that took place. We believe the hypothesis presented here is the most likely explanation so far, primarily supported by the strong assumption that the clade X viruses co-circulated with the proximal ancestors of both RmYN02 and SARS-CoV-2 after the two lineages separated. This hypothesis is also consistent with the complex recombination mechanisms that govern coronaviral diversity (Graham and Baric, 2010; Dudas and Rambaut, 2016), fully supporting a natural origin of the furin cleavage site insertion.

Spike nucleotide alignments for SARS-CoV-2, RmYN02 and RaTG13 were created using MAFFT (Katoh and Standley, 2013). Alignments were later edited on Bioedit. Animation 1 presents the putative ancestral sequences of pre-SARS-CoV-2 and the clade X virus involved in the putative template switch event. RaTG13 (which possesses the closest sampled sequence for the furin site region to that of SARS-CoV-2) and SARS-CoV-2 were used to infer the pre-SARS-CoV-2 sequence, by retaining identical nucleotides and representing differences in the sequence using IUPAC ambiguity codes, i.e. Y: C or T, W: A or T, R: A or G. The insertion sequence was also excluded in the pre-SARS-CoV-2 sequence. The clade X virus sequence was based almost entirely on the RmYN02 sequence with the exception that the two arginine codons (CGG CGG) on the insertion region were added in accordance to the current SARS-CoV-2 sequence. The alignment of existing and reconstructed sequences is attached below (anc_recon_al.fas).

Do you think it could be important to look at the raw sequencing data for RmYN02 to inform this analysis? Considering that in Fig 2B, RmYN02 would’ve not only had to lose the 2 arginines, but also the 4 residues closely upstream of the PRRA insertion site?

In this regard, you’re estimating what would be more likely: (Fig 2A) more sequence divergence vs. (Fig 2B) recombination followed by 2 deletions within this narrow region in RmYN02.

Not having access to the RmYN02 sequencing data makes it difficult to know whether this spike is from the same virus that produced the closely related Orf1b sequence (and whether the entire sequence is high quality). Regardless, because the spike sequence is not that similar between RmYN02 and SARS2 or RaTG13, and considering that recombination could occur between CoVs from different lineages, I think it could be useful to include other closely and not-so-closely related CoVs (e.g., ZXC21, ZC45, MERS, HKU1) in your Fig 2 alignments. I didn’t have time to make it fancy but please take a look:

The lowercase sequence in RmYN02 covers the PAA and flanking residues. One thing that stood out to me is how closely the aactcacctgc is aligned with the nt sequence from HKU1, and that the nt alignment of this region places RmYN02 between SARS1 and HKU1 rather than the SARS2-like viruses. What are your thoughts on this?

For example, if you drew a tree of the spikes for SARS-CoV-2, RaTG13, GD pangolin, SARS-CoV, MERS, HKU1, and RmYN02, could you point out where each template switching, recombination event, or deletion event should have occurred in that tree (i.e., in the context of virus divergence)?

This would help me to understand how the furin cleavage site evolved in only SARS-CoV-2, but not in any of the other SARS family viruses, which include RmYN02 itself, RaTG13, both the GD and GX pangolin CoVs, SARS-CoV, and the dozens of SARS-related CoVs sampled over the past 2 decades.

Thanks for your reply! I think having access to the raw RmYN02 sequencing data would be interesting but would unlikely be very informative to this hypothesis. This part of the RmYN02 sequence has been confirmed with Sanger sequencing (Zhou et al. , 2020, Figure S2 https://doi.org/10.1016/j.cub.2020.05.023), so there shouldn’t be a problem with sequencing quality, at least for this region.

If I understand your question correctly, then the 4 residues upstream the insertion in RmYN02 (as seen in Fig2B) are not missing from the sequence. Based on our hypothesis they were never there in the clade X virus sequence responsible for the furin insertion. The supplementary alignment of RmYN02, RaTG13, SARS-CoV-2 and the two putative ancestral sequences present at the template switching I’ve attached on the post above might make this a bit clearer.

The HKU1 – RmYN02 sequence similarity is interesting, but current sampling of coronaviral diversity is too limited to explore the origin of all sequence identities, i.e. it could be homology through recombination events or simply sequence convergence. What increases our confidence for this particular hypothesis regarding the origin of the furin site is that the RmYN02 sample includes a Spike sequence with the homology to the furin site we point out above, and an Orf1ab sequence that diverged from SARS-CoV-2 not too long ago. Unlike other sequences that share homology with the interesting regions of SARS-CoV-2, these ‘RmYN02 Spike’-like (clade X) viruses have very likely been recently co-circulating with the proximal ancestor of SARS-CoV-2.

Just to help me understand, do you mean that,

Would you be concerned if the RmYN02 Orf1b and Spike contigs were separate; not from the same virus?